About 70 Rockefeller family members gathered for a two-day reunion in Oct. 1906. The family enjoyed a banquet in Flemington, and spent the night in the Union Hotel. 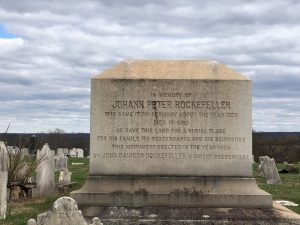 The next morning, they clambered aboard 25 wagons and headed to Larison’s Corner for the unveiling of the 10-foot graveyard monument honoring Johann Peter Rockefeller, their first ancestor to settle in America. Johann Peter owned a farm one mile west of Rocktown, and he was buried on a portion of that land. The Rockefellers toured the area where Johann Peter lived and picked clean a pear tree supposedly planted by him.

The most famous family member, John D. Rockefeller, did not attend. The New York Times stated in an article about the reunion: “It is admitted by the poorer relations that, so far, he has not paid any attention except that he reads typewritten copies of the family eulogies after they have been delivered here.” (Reunion photo from past HCHS newsletter.)

We are on a roll! Another New Collection: No. 231, the Polhemus Family Papers, has been released and is now available at the HCHS Archives!This collection contains genealogical records including correspondence, photographs, and family trees pertaining to the Polhemus and allied families. The correspondence is between I. Heyward Peck and genealogist Mrs. Alfred P. S. Bellis, for the purpose of learning Mr. Peck's lineage in the Polhemus family. This collection would interest any researcher of the Polhemus family as well as the descendants of the Schenck, Skillman, Van Dyke, Cool, Bellis, Cruser, and Longstreet families.The collection inventory may be found here: hunterdonhistory.org/wp-content/uploads/2022/11/Collection-231-Container-List.pdfSpecial Thanks to our archival volunteers who worked hard to get this collection available to our patrons... ... See MoreSee Less

I DID mention the HCHS Archival Volunteers were hard at work, right? Second release this week: Collection No. 246, the Ryman Herr / Readington School Records (1950-1959). Might not sound too exciting unless you are interested in the history of schools in Readington, but hey, everyone has their special interests, right?This collection of papers was created and collected by Ryman Herr during his time as attorney for the Township of Readington and the Readington School District. These documents include correspondence and legal instruments concerning the sale of school properties within the district, as well as the management of alterations and construction made during the same time. The folders of the collection are divided by the school building or property to which they pertain.Sorry no photograph, but there are none in the collection, just manuscripts :)The Collection Inventory can be found here: hunterdonhistory.org/wp-content/uploads/2022/11/Collection-246-Container-List.pdfSpecial Thanks to Archival Volunteer Deirdre Lafferty for processing this collection! ... See MoreSee Less

A new collection from the HCHS Archives featuring the Frances Barberie Photograph Collection...The HCHS Archival Volunteer crew has been hard at work this year. It seems that we have processed quite a few collections of photographs lately, and this latest release is one of them: Collection No. 240, the Frances Barberie Photograph Collection. This collection consists of a series of mounted photographic prints, with descriptions, from Flemington, N.J. and the surrounding area, ca. 1904-1915. Most of the images are from the greater Flemington area, but there are also images from Somerville, Lambertville, Clinton, and even from the Inter-State Fair in Trenton. This collection would interest anyone looking for images of Hunterdon County from the representative time period.We are actually not sure who the photographer was for these images. Based on evidence seen in processing another collection, some of the images may actually be by Asher Stryker, of Flemington, but certainly not all of them. The collection was donated to the Historical Society by Frances Barberie. Frances Barberie was the child of Thomas Torrent.Accompanying this collection is a notice stating that "This exhibit of pictures is a replica of part of a collection, showing places and events of interest in Flemington. Shown through the courtesy of Thomas Torrent from whom any one or the entire collection of pictures may be obtained. Address - R.D. 1, Croton Rd. Ringoes N.J." It is fairly clear that multiple photographers contributed to the overall group of images, although none are credited. Regardless, the images are quite striking, and we are sure you will enjoy them and some of you may find use for these in research. We certainly hope so!The link to the collection inventory is here: hunterdonhistory.org/wp-content/uploads/2022/11/Collection-240-Container-List.pdfThe images can be viewed on our website in the "Online Catalog" portion of the website. Special Thanks to Archival Volunteers John Matsen for arranging and Michelle Clinger for describing the collection! ... See MoreSee Less

Hunterdon County is resplendent with a history of citizens who answered our nation's call to serve and protect it. This Veterans' Day we remember them. One such veteran is Courtland Morris, who was born in Plumstead, Pa., and first served in July, 1863, when he enlisted in the 45 Pa. Cavalry forming in Harrisburg to defend the state against Lee's invasion, which culminated in the Battle of Gettysburg. He later re-enlisted with 30 Hunterdon County men, mostly from Lambertville, in the 3rd New Jersey Cavalry. He fought under Gen. Phillip Sheridan in the Shenandoah Valley against Jubal Early and was at Appomattox Courthouse for the surrender of Gen. Robert E. Lee to Gen. U.S. Grant. Later in life, Morris was employed by the Delaware & Raritan Canal Company as a Lock Tender at Raven Rock. He died in 1924 and is buried at Rosemont Cemetery.#alwaysremember #veteransday #veteransday2022 #history #nj #civilwar #cavalry #Gettysburg #hunterdoncounty ... See MoreSee Less

Join us Sunday, Nov. 6 at 2 p.m. for our annual fall meeting featuring a fascinating program on the Carlisle Indian School with Gina Sampaio and Robbie-Lynn Mwangi. The program is free, and everyone is welcome. It will be held at the Flemington United Methodist Church’s Fellowship Hall, 116 Main St. in Flemington. ... See MoreSee Less