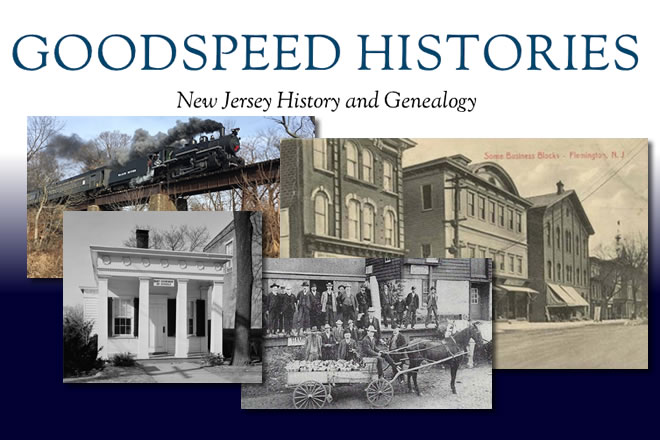 Hunterdon Co. National Bank meets up with the Civil War

** June 11, 2021
————————————————————
I am continually amazed at how a seemingly boring subject, like the history of a bank and its building, could turn out to be so interesting. You can usually tell how interested I am by the number of parts to a story I end up publishing. I was sure I could finish this off in one, but no, it needed a second part, published today (with more interesting photographs). And once I got to the end I realized I needed just one more episode in this bank story. I will try hard to make it shorter but can make no guarantees.

Flemington’s First Bank, part two (https://goodspeedhistories.com/flemingtons-first-bank-part-two/)
This article takes place during the Civil War, an odd time to be building a magnificent bank building. It certainly is a reflection on how much safer residents of northern New Jersey felt compared to their southern neighbors.

An Unfortunate Name
Speaking of banks, while browsing through the Hunterdon Republican newspaper of yore, I learned that on July 10, 1871, the Directors of the Lambertville National Bank elected a new cashier, since their previous cashier, Martin L. Reeve, had recently died. But I have to wonder what those Directors were thinking when they chose to replace him with a man named William Crook.
It’s hard to believe this was a real person, but in fact the Crook brothers, William and Charles, were born in NJ but had moved to New Hope by 1850 and raised their families there. William Crook prospered in his new home, calling himself a Gentleman in the 1860 census. But by 1870, he found it necessary to return to the work force, taking the job of Cashier from the Lambertville bank. Luckily for him, the Directors did not hold his name against him.

12th Anniversary for GH
My calendar tells me that twelve years ago today I began publishing articles on my website. My website tells me that so far, including family trees and today’s article, I have published 543 of them. Not a nice round number, but quite a lot more than I originally thought. The problem is—there’s just so much to write about!

Indexing Articles
They say it is important to keep printed copies of one’s work, but keeping track of where they are is a real challenge. I’ve been working on my Index lately. This differs from the “List of Articles” that appears on the top menu bar. That takes you to a chronological list, beginning with the most recent article. My Index does something different—it collects articles into subjects, arranged by time and place. Because I am somewhat impetuous about what I chose to write about, it is not aways easy to figure out how past articles fit together. I’m working on it, but am far from finished.

Observations on “Locusts”
from the Hunterdon Republican.
July 17, 1889: “Joseph E. Hampton of Baptisttown, writes us that a few 17-Year locusts appeared on his farm about 5 weeks ago and after singing for a few days disappeared. This seems to verify a prediction that they would appear this year.”

June 13, 1894, Brief News from Glen Gardner: “The seventeen-year locusts have arrived and there are millions of them!”

Take a Walking Tour of Frenchtown that will benefit our veterans. Details below: ... See MoreSee Less