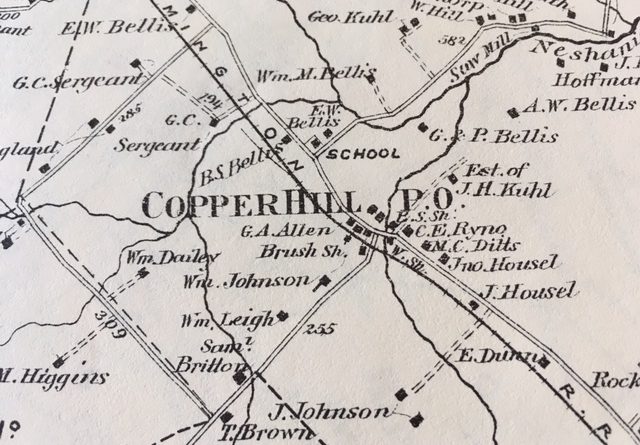 Once again, I’m taking a side trip from the Delaware Flemington Railroad route. It turns out, Johanna Farms Road has an interesting history, and since it’s right nearby and involves a deed from the Hoaglands, I could not resist. First comes the property on the south side of the road (in two posts), and then the property on the north side, which will take us back to the railroad route.

Changing the Language
Statues are not the only things coming down. So are long-used words that have unacceptable connotations. FREEHOLDER, which in New Jersey has long meant an elected official (that’s the “Chosen” part) who managed county government is about to be replaced by “county commissioner.”

That word will not be disappearing here, though. When I write about someone elected to the Board of Freeholders, that’s what they will be called. And if they are referred to as freeholder in their capacity as land owners, that is also what they will be called. Of course, I am not writing about current officeholders or landowners, so I won’t worry about what I call them.

PLANTATION is another word that people are objecting to. It’s a word with some nasty connotations, but you will find it in old land records, referring to any large tract of land that has been cultivated. Sometimes when I am referring to one of these properties as described in an 18th or 19th century deed, I’ll use that word because it was used in the deed. But probably not as often now.

Strictly speaking, the word “plantation” refers to a large group of plants or trees in a settlement. Webster’s Dictionary has a second definition: “a settlement in a new country or region,” and thirdly “a place that is planted or under cultivation.” The last definition is the one associated with slavery even though the dictionary avoids using that word:  “an agricultural estate usually worked by resident labor.”

Exactly what was meant in the 18th century by plantation in NJ land records is hard to say, but it did not mean a labor system based on slavery. However, that is what people think of today, and truth be told, that was what I first thought way back in the 1980s when I began doing this sort of work.

Like Freeholder, the word plantation cannot be erased from old documents and from American history.

MESSUAGE
Here’s another word that fell out of use quite some time ago. It’s a very old one, going back to the 14th century. It is derived from Old French to mean a dwelling house, and also from Latin for mansion. It appears in old deeds to indicate there is a house on the property being sold, but in fact, that was not always the case. The word had gotten to be a meaningless part of a boilerplate phrase, “all that tract or parcel, plantation, messuage,” etc.

Losing Our Newspapers
While I’m at it, I must lament the loss of good old-fashioned gossipy local newspapers. The Hunterdon Gazette disappeared way back in 1866, absorbed into the Hunterdon Democrat, which itself has been absorbed into the Star Ledger, which is a shadow of its former self. The Hunterdon Republican petered out early in the 20th century. Where do we get our local news from now? Where do we learn about local politics? The Internet is just not equal to the task.

Recently Margaret Sullivan, former editor at the Buffalo News and then the NY Times, wrote a piece in the Washington Post about the loss of local newspapers, something happening throughout the country.

Papers became targets of large-scale investors, instead of being owned by local editors. That made a huge difference when it came to business decisions. What got sacrified in order to make the paper turn a profit? First off, that meant killing the competition. Next, cutting expenses to turn a larger profit, or in other words, cutting staff.

That was incredibly short-sighted. Fewer experienced (and higher paid) reporters meant a loss of good journalism, and readers noticed it. So, readers were also lost. Then the internet comes along and destroys the business model that depended on advertising.

One More Loss to Lament
The Hunterdon Democrat was a worthy local newspaper back when it was owned by the Thomas family. They had a policy of hiring high-schoolers to intern as reporters, an opportunity that both my sons took advantage of, and both have grown up to be journalists. Son Ben recalls being allowed to tag along during coverage of a murder trial taking place at the court house. Afterwards, the reporters would go across the street to the Union Hotel to have a drink and discuss the day’s events. It was a time-honored practice that is no more.

As it happens, news has just come out that Jack Cust has taken full ownership of the hotel, which I suppose means things will soon be changing. But recreating that gathering place of long ago is unlikely to happen.

Apologies for this solemn newsletter. I’ll try to be more upbeat next time.
Marfy

Dr. Greg Herman and Mark Zdepski installing LED lighting in one of the cabinets that holds the Deats/Thatcher Native American Collection of artifacts. The cabinets are in the top floor of the Flemington Library. You can read more about the collection and the recent digitization work to digitize this important collection on page 1330 of our newsletter here: hunterdonhistory.org/wp-content/uploads/2020/06/Spring-Newsletter-Revised-April-24-2020.pdf) ... See MoreSee Less

Our monthly Collections Gem spotlights a map of the U.S. from 1884. Learn more about it: hunterdonhistory.org/collection-gems-july-2020/ ... See MoreSee Less

You'll find this and other great local history reads at our online store. Go here to find your next favorite summer read: hunterdonhistory.org/local-history-books-and-maps-for-sale/