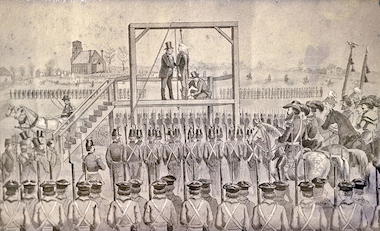 We are more than half way through January and we have great articles:

Janury 7, 2020: Harper’s Ferry: On the Eve of War
Abolition was not widely supported in Hunterdon, but neither was secession. One of the reasons this appealed to me is the same reason I began writing about the landowners along the railroad route: the names of the signers of a declaration were given in a list without any identification—just a series of names, many with just first initials. I wanted to know more about these people, and what the declaration was really about. Perhaps you do too; perhaps you will even have an ancestor on the list.

Thanks to Bill Hartman’s abstracts of the Gazette and the Republican, it is possible to see that politics in Hunterdon County in the 1850s was remarkably complex, and a subject I will probably be returning to, with the help of John W. Kuhl’s book on the Civil War and Hubert G. Schmidt’s pamphlet on attitudes toward slavery in Hunterdon.

January 14, 2020, Route Not Taken, part 3
I have included with the heading of each landowner, how they were identified in the Beers Atlas of 1873, the list of landowners compiled by the company engineer (Slaymaker), how their names appeared on the railroad survey map, and how they were described in a survey compiled by Isaac S. Cramer, found among the railroad company papers at the County Historical Society. That Cramer survey is a gold mine, and will get its own article once I’ve gotten to Flemington and finished this series.

As so often happens, while researching Charles Green of Sergeantsville, I discovered his brother Peter Green, who was the owner of the original blacksmith shop in the village, location today of WDVR radio station. The temptation to veer off and write about Peter and his family is mighty strong, but if I do that I will never get to Flemington on this fantasy railroad route.

I should have published this past weekend, but I had two wonderful distractions. On Saturday, visited Ray and Debbie King and got a personal tour from Ray of his amazing barn/studio. Anyone driving north from Stockton on Route 523 will have noticed it. It isn’t often one gets to see a post & beam structure going up and it is very handsome. It was a special treat for me to see it before its siding is applied. The view from inside is stunning.

My next distraction took place on Sunday, when Dick and I got a personal tour of Frenchtown from Rick Epstein. Rick, former managing editor of the Hunterdon Democrat, and author of the “Old Ink” section, gives these tours during the warmer months, but pollen keeps me indoors, so Rick offered to give us a tour on what turned out to be a beautiful day in January. I highly recommend Rick’s tours to anyone interested in Frenchtown and Hunterdon history. (If you go, be sure to ask him about Aaron Burr.)

January 25, 2020, The Route Not Taken, part 4
This article was unusual in the number of family connections that kept turning up. Following the Hoppock, Moore, Dalrymple, Parks and Cole families was a challenge because everyone was so interconnected. But it was also fascinating to discover a pattern I had not noticed before: married women buying and selling property in their own name.

I get so much information about people from the deeds they record, that I sometimes get surprised when the deeds don’t tell me what I want, or even worse, when they’re not there at all. I have come up with a couple explanations for why this happens. They both occurred while I was researching this week’s article:

2. Speaking of misleading maps, sometimes the initials are just wrong. Case in point, the Cornel Map of 1851 showed “R. Reeve” at a property later owned by Mrs. Abbott. But I could not find any deed for an R. Reeve that hit the bill. Thanks to discovering Mrs. Abbott’s deeds I was able to work back and find that the 1851 name was really “F. Reeve.” F does look a lot like R, but not that much. The problem got repeated in the 1860 Philadelphia map when the name appeared to be “J. Hummer,” of which there are way too many, when it was actually “S. Hummer.”

It would make life so much easier if all men and women would marry partners whose first initial was the same as their own. Then they would be listed together in the Deed Indexes. That did happen from time to time, but not often enough for me.

I came upon a reason why some people did not bother to record their deed in the Jan. 17, 1844 edition of the Hunterdon Gazette. It was a notice submitted by Peter I. Clark, the County Clerk:

DEEDS & MORTGAGES. THE owners of these papers left at the Clerk’s Office, to be recorded, have in general, manifested such indifference to the payment of the recording fees, (which by the rule of the Office, are to be paid on the deposit of the papers) that I am compelled to say to the persons interested, that if such fees are not paid at the next term of this Court, they will immediately thereafter be placed in the hands of a Justice for collection.