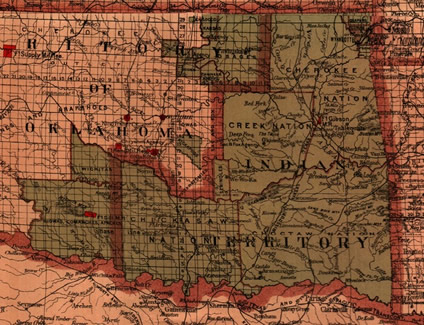 Continuing our discussion of Map 27 of the Hunterdon County Historical Society’s Map Collection, moves our focus westward. To recap, Figure 1 illustrates the differences resulting from the surveys used in the 18th Century States (and their derivatives, like West Virginia) and the complex nature of land surveys applied to Ohio. Much of what is now Ohio was set aside (e.g.: Virginia Military Land) as land grants to Revolutionary War veterans.

Figure 2 reflects another historical event. It is the legend for Map 27 and includes the cryptic terms “Private Claims, Confirmed” and “Private Claims, Unconfirmed”. Spain and, subsequently, Mexico once held territory that became – in part or in whole – many of the western states. Surveys associated with land grants predate the creation of the Republic of Texas, and the later expansion of the United States, following the War with Mexico. When these lands were ceded or sold to the victors, the 1848 Treaty of Hidalgo guaranteed the property rights for recipients of these land grants. After numerous efforts to settle these claims, a Government “Court of Private Claims” was established in 1891 to address legal ownership of the land. Perhaps it is unsurprising that less than 10% of claims were confirmed to be legally binding, and several of those were reduced in size. Figure 3 shows Private Claims (confirmed and unconfirmed) in the New Mexico Territory.

As shown in Figure 4, the armistice signed following Texas’ war with Mexico made no provision for pre-existing property rights, so no land claims are shown on the map.

While looking at this figure, notice the radiating railroads emanating from the stock yards of Fort Worth. These railroads challenged the cattle drives along the Chisholm Trail that brought longhorn cattle to rail heads in Abilene, Kansas and other places for transportation to the rest of the country where the cattle were worth 10 times the value of animals sold in Texas! Rails created a number of settlements along the line, leading to the term “cow towns”.

Finally, Figure 5 is a close-up of the eastern part of the the present-day state of Oklahoma. The Map lists the Native American Nations inhabiting what was then “Indian Territory”, as distinct from the Oklahoma Territory to the west. You are likely familiar with the term “Trail of Tears” as it relates to the dislocation of the Five Civilized Nations (Choctaw, Chickasaw, Cherokee, Muscogee (Creek) and Seminole) from their homes in the southeastern United States to reservations west of the Mississippi River. The Indian Removal Act of 1830, passed by the Andrew Jackson Administration, authorized the forced removal of some 100,000 people westward over 5,000 miles to an areas the U.S. Government reserved for them. Figure 5 illustrates the end point of this enforced migration, and that of several additional Nations subsequently settled in “Indian Territory”. Notice, too, the proximity of Military bases (colored red) to these western Indian reservations. This map was published only a year after the final defeat of the Lakota Sioux in the “Ghost Dance War” at Wounded Knee, South Dakota in December 1890. The settlement of so many Native American people reflected the Government policy of assimilation, intended to “civilize” them into American cultural values and practices. Elements of this acculturation policy included banning traditional dances and feasts, polygamy, reciprocal gift giving and funeral practices, and intoxication or the sale of liquor. Also prohibited were “medicine men” who “use any of the arts of the conjurer to prevent the Indians from abandoning their heathenish rites and customs.” The banning of Indian languages and practices, and education of youth at off-reservation boarding schools were also thought to improve “Americanization”. In light of these measures it probably is not surprising that the fight for Native American rights continues to this day.