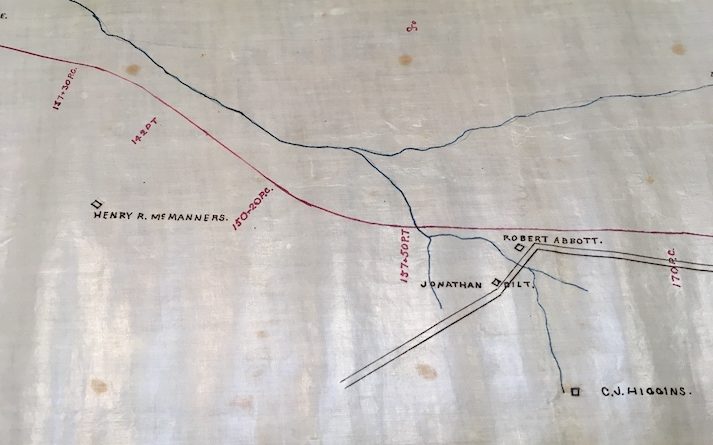 Winter Solstice and the last post of the year:

Part Two of The Route Not Taken (https://goodspeedhistories.com/route-not-taken-part-two/)
I had originally thought that I could write one article describing all the property owners along the route, just giving a brief overview of who they all were. But, just as Egbert T. Bush’s list of landowners was not all that interesting, the same is true of a brief overview. To the extent possible, I want to know what these people were like, why they were living where they were, and whether they would like having a train coming by their homes, probably a few times a day.

Because two members of the Johnson family were featured in today’s article, I realized it was time to do up a Johnson Family Tree. If you are familiar with 19th century families in the area, then you will recognize how ubiquitous the Johnson family was.

Johnson Family Tree (https://goodspeedhistories.com/johnson-tree/)
Today’s article only covers seven landowners and their families—out of a total of 47. Clearly this is going to take awhile. But it’s too interesting, at least to me, to call it quits. So you can expect more of this sort of thing in the coming year. Families to be studied are Greens, Gordons, Parks, Moore, Carrell, Sutton, and many more.

As for the rest of the coming year, I am hoping to wander into Kingwood Township by moving north from Rosemont along Route 519 and heading toward Baptistown. I am also interested in landowners on Route 579 approaching Quakertown. Lots of interesting history there.

Many thanks to all of you for reading my articles and commenting on them. I have learned over the years how important you readers are, how inspiring you can be. After all, I’m not writing for a wall, I’m writing for myself, true, but more importantly, for all of you.