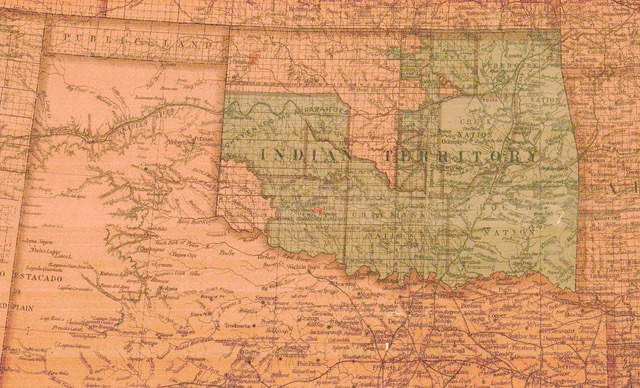 The figures have been edited to increase legibility for this article.

Map 21, an 1884 map of the United States (Figure 1), reflects the country almost 20 years after the Civil War ended. There were only 38 states in the Union, none having been added since Colorado in 1876. There was still a substantial presence of Native Americans – or, in the parlance of the time, Indians – in the country. The map is replete with substantial reservations in the Montana, Washington, Dakota and Oklahoma Territories (Figures 2 & 3) on which the government was determined to confine this population. Much of these reserved lands were occupied by the United States when North and South Dakota, Montana and Washington, were all added to the Union in November 1889. (Next month’s Collection Gem).

On the political front, the Democratic Governor of New York, Grover Cleveland, narrowly defeated Republican James Blaine (by 0.6% of the popular vote) to win his first term as President, succeeding Chester Arthur. Cleveland is the only person to have served two non-consecutive Presidential terms and he was the first Democratic President to hold office since before the Civil War. Interestingly, there were other parties to put their selection up for election: the Greenback and Anti-Monopoly Parties both ran former Union Major General Benjamin Butler for election, while the Prohibition Party nominated Kansan John St. John. Also running was a woman candidate, Ms. Belva Lockwood, nominated by the Equal Rights Party. (Bonus fact: the first woman to run for US president was Victoria Woodhull in 1872.) In reality, it was a two party race, with Democratic and Republican nominees gleaning over 97% of the popular vote, and taking 100% of the electoral votes. The last president from a different party was a Whig, Millard Fillmore, who served as the 13th president president from 1848 to 1852.

For “average” Americans, 1884 was a big year. On May 1 (then Labor Day) the Federation of Trades and Organized Labor Unions resolved to support efforts to institute an eight hour workday, the Statue of Liberty was dedicated, and both Harry Truman and Eleanor Roosevelt were born. None of these events affected American history for many years, but there’s a start to everything.

Closer to home, New Jersey lacked direct rail connections with New York City and Philadelphia (Figure 4). Trains crossed the Delaware and Hudson Rivers by barge or ferry. So did pedestrians or horseback riders (unless the rivers were sufficiently iced over). Notice how many railroad lines terminated at Jersey City and Camden. These served as regional terminals providing connections not just to major population centers like Philadelphia, New York, Brooklyn, and Trenton, but also to developing resort towns on the coast (like Atlantic City) and up the Hudson Valley.

Next month will include figures illustrating the extent to which reservation lands in the Northwest and the Dakotas and Oklahoma shrank – and had been surveyed for “white” settlement – by 1903. The discovery of gold in the Black Hills played a significant role in the opening of the Dakotas, discovered in South Dakota in the 1874 (where a gold rush peaked in 1876/77) and in North Dakota in 1887. Th Oklahoma Land Rush (following the Indian Appropriation Act) of 1889 resulted in significantly reduced “Indian Territory” in what is now eastern Oklahoma.