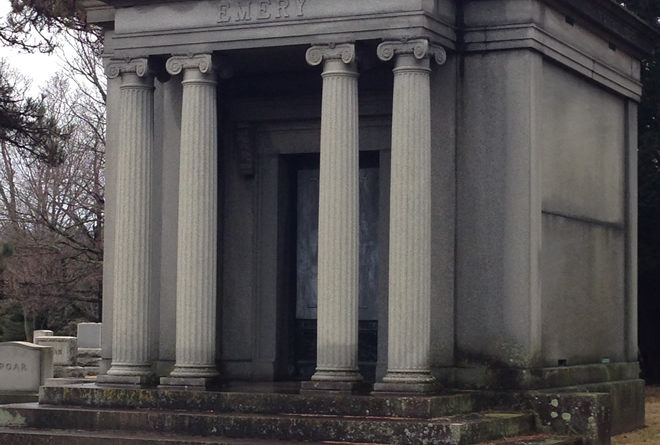 One would think the Map Collection holds only maps… but one would be wrong! One of the interesting “non-map” holdings in the Society’s Map Collection is Map 82, a set of 6 blueprints for a proposed mausoleum for the Emery family. Figure 1 shows the front elevation of the design. The mausoleum was destined for the Flemington’s Prospect Hill Cemetery. Mr. Emery is interred in Section B, a map of which is also in the Society’s Collection (Map 70).

However, the marker I found on Find-A-Grave is not the design in the blueprint. Rather, it is the one in Figure 2. There being no helpful lead on the blueprint, I assumed it was William P. Emery. He was a major land owner in Flemington, owned a lumber yard south of the South Branch Railroad, and several other lots, circled in the 1873 Beers map in Figure 3. Included are tracts on both sides of William Street (merely a coincidence?) and two lots at the intersection of Mine and Main Streets. Of particular interest is the large tract owned adjacent to Broad Street, east of Main Street. No intersection was there at the time, but now it is recognized by the cross street: Emery Avenue, which coincides with the northern property line of this lot.

Multiple online books record William’s ordination as an elder for the Flemington Presbyterian Church in 1848, a position he held for 25 years. He served on the Church’s Building Committee responsible for the renovation of the Church that was dedicated in May 1857, served two terms as a Church trustee, was elected an associate of Flemington’s Fame Fire Company upon its incorporation in 1841, and served several terms on the board of directors and officers for the Flemington Railroad. The man was involved! No wonder he would have a large mausoleum!

So that’s the story, right? Wrong!

I visited Prospect Hill Cemetery after I wrote the above and found the Emery mausoleum built per the blueprint in the Collection (Figure 4). But there are no names (other than “Emery”) on it, so I have to assume the mausoleum belongs to another Emery. The answer is likely provided by other information from the Hunterdon County Historical Society. Another well-to-do Emery was William E. Emery, based on the photographs of two Emery houses (Rose Lodge and Rose Hill) in HCHS holdings: Box 2: Vault 1. William E. Emery is also listed on the Beers map as a Lumber Merchant (see Figure 3). What is relationship (if any) of William E. Emery of Rose Lodge and William P. Emery of Rose Lawn? It isn’t clear from the available Federal Census records, but it’s hard to believe they aren’t related. A little more research might resolve that question.

As an aside, the Society has several other Emery-related holdings in its Collections.

Manuscript Collection 7 contains the papers of the Estate of William P. Emery from 1901 to 1934. Given these dates, the donor of these papers was clearly a son or grandson of the subject who was born in 1810.

I need to do more research.