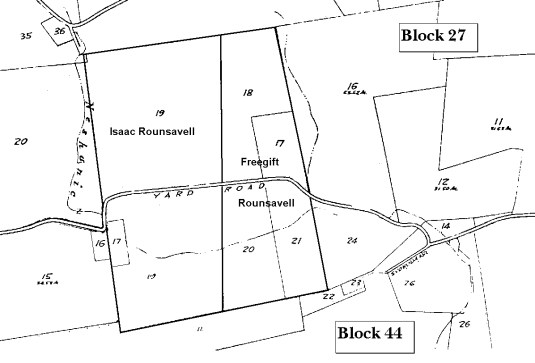 As I was researching, I thought I’d check out the road return for Yard Road, where the Rounavells lived. I was hoping for a survey map. There was one made, according to the return, but it was missing from the file. Very disappointing!

What is curious about the return is that it described a road that does not really exist anymore, even though there still is a Yard Road. The route has changed considerably from its origin in 1841.

If you are the sort of person who enjoys a country ride, you really should check out Yard Road. It’s got it all—wide open farm fields with ancient hedgerows, beautiful one-lane bridges over trickling creeks, heavily shaded. Lovely. Also several interesting old houses, including the Rounsavells. My only complaint is the McMansion perched atop an unusual hill at the intersection of Yard Road and Sandbrook-Headquarters Road. It looks ridiculous!

Anyway, if you start on the Route 579 end you’ll end up in the charming village of Sandbrook, and then you can head down Route 523 to Sergeantsville and then to Stockton and across the river to Lumberville.

Alternatively, start at Sandbrook, and at Route 579 turn right and head south to Ringoes where you can pick up the Old York Road which takes you into Lambertville. Both routes are lovely drives.