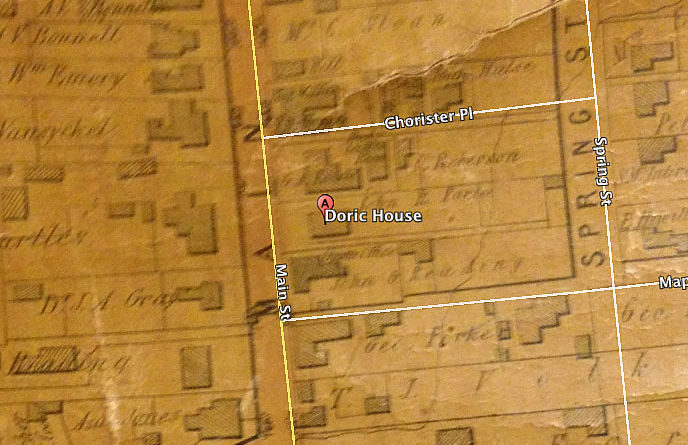 The Society owns a (not very photogenic) 1857 map of Flemington (photo 1), this month’s Collection Gem. There is much to discuss about this map, displaying – as it does – the Union House on Main Street, Samuel Southward’s law office, and the Presbyterian and Baptist Church buildings. Most of these still stand; the Union House being the predecessor of the 1878 Union Hotel.

The Doric House – owned by the Society – can be located, too (photo 2 with Google Earth background). There was apparently a Methodist-Episcopal Church on Main Street, presumably predating the present day Methodist Church on Main, and the Episcopal Church on Broad Street. Familiar names abound as property owners: Reading, Capner, Bonnell and Holcombe, among others. But did you know where the “now gone” Bank Street was? All interesting and worthy of investigation, but – as a retired geologist – my attention was drawn to a property on the western periphery of the map.

Mining has a long history in Hunterdon County; iron ore in the north, copper in the south. Notice Mine Street, which also still exists in name and location. This road led to the property owned by the Flemington Mining Company (photo 3). James Snell’s 1881 “History of Hunterdon County” suggests the Company was formed in 1837, failing a few years later. It was resurrected when, according to the 1891 inaugural volume of “The Jerseyman”, Hugh Capner encountered copper while digging a cellar for his house, and sold his farm for $35,000. The Flemington Mining Company was chartered on 20 September 1846 and was “back in business”. This is the Company shown on the map, but the name was changed to the Raritan Consolidated Mining Company on March 17, 1854, a few years prior to this map publication. The Company was renamed the Hunterdon Mining Company in 1867. The Company expanded its holdings to include the farm of Joseph Case “just across Mine Brook”, taking ownership of what is now known as the Dvoor Farm. In the event, the ore bodies were small and discontinuous, making no money for those who initially purchased stock in the enterprise, nor for most shopkeepers in Flemington who extended credit to the miners and were, of course, never repaid. Money was made, however, by the initial investors who re-sold their stock at inflated prices. All was not lost, however. The article includes the statement that “Dr. C. W. Larison… gives it as his opinion that there is a large and valuable body of copper ore in this region which will be worked at some future day.” While there is no evidence of mining activity since the 1891 article, there are plenty of reminders available to you harkening back to the heady days of “copper fever”: Mine Street, Mine Brook (aka Walnut Brook), the Coppermine Apartments, and the Hunterdon County Culture & Heritage Commission markers regarding the copper mines on both Mine Street and US 202/NJ 31 at Copper Hill.

Don’t let photo 1 dissuade you from examining this map at the Deats Library on Main Street in Flemington! The map itself is much more legible than my photo and deserves your attention.