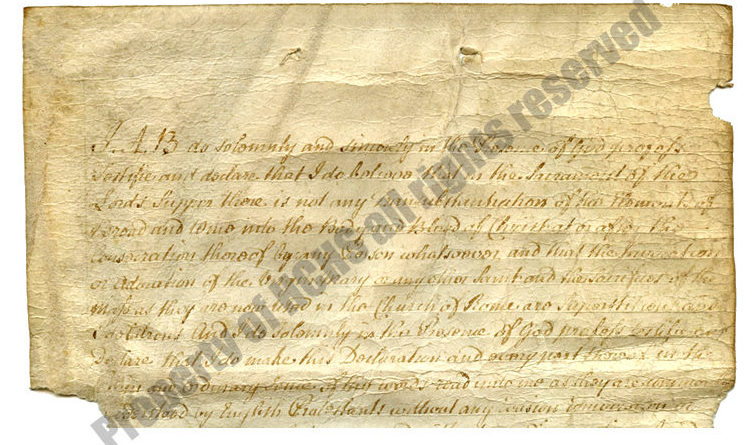 In August of this past year the archives team was cataloging manuscripts from a backlog of unprocessed records found in the library office. We had set aside a small bundle of parchments, because we knew they were quite old and most likely important documents. When we unrolled and examined them, we were astonished to discover that these are very important parchments, indeed.

We discovered two related documents: Oaths of Abjuration and Fealty, from 1744-1758. In those days, any person who was elected to or appointed to a public office had to swear (or affirm, if they were a Quaker) to two different but related oaths. The first is an Oath of Abjuration, in which the person who signs swears (or affirms) that they reject the teachings and authority of the Catholic Church in Rome and the Pope. This is a paraphrase, of course; the actual oath is quite fascinating and highly detailed in its utter rejection of Catholic Catechism. The other oath, signed in conjunction with the first, is an Oath of Fealty where the person signs (or affirms) that they owe their allegiance to George II, King of England, and that they reject the claims of the Pretender King James III or again, the authority of the Pope and Church in Rome.

Each official signed each document when they took their office. Also, the same documents of signatures were used for a period of at least 14 years; additional sheets of parchments were sewn to the bottom of the last as more room was required. The result is a veritable list of signatures of “who’s who” in mid-17th century Hunterdon County. At this time, the county stretched from Trenton (the Assunpink Creek) in the south to the ancient border with Sussex in the north, so this list is more extensive than you may think. It includes the signature of at least one Signer (John Hart), and many other people who came to prominence in the revolutionary times or were the fathers of those who did.

Unfortunately, the parchments do show some signs of their age. There are areas where the writing has faded, or is covered with dirt, and at some point in the distant past a mouse must have gotten to them. Fortunately, the documents are almost mirrors of each other, with the same signatures in roughly the same places on each document, so what is damaged on one is usually intact on the other.

The question remains, however, as to how did the Society come to be in possession of these documents? That question was answered by Mike Alfano, a Society member and library volunteer. After some research, Mike discovered a paper read before the Society by Elias Vosseller on September 7, 1901, and published in The Jerseyman: “An Interesting Find of Two Parchments Relating to Early New Jersey.” (Vol. 7, No. 4, Page 31, 1901)

In his address, Mr. Vosseller relates his discovery of these documents some weeks previous in the office of the County Clerk, “dusty, faded, stained, torn and mouse-eaten.” He was obviously impressed enough with the importance of the documents that he

obtained permission of the Clerk, A.R. Dilts, Esq., to take them out and make copies of them. Afterwards I read to him these copies and then asked him to allow the originals to be placed in the archives of our Society for care and safe keeping. This request he granted.

So, 115 years after Elias Vosseller discovered these amazing manuscripts in the Clerk’s office and had them transferred to our care, we have re-discovered them. The importance of these documents, both as items that preserve cultural history and as artifacts in and of their own right, is priceless. Immediately upon discovery, Pamlyn Bush, one of our library and archival volunteers, made a donation to the Society to cover the cost of a conservation report and treatment plan to be performed by the Conservation Center for Art and Historic Artifacts. The items have been delivered to Philadelphia and the process of Conservation has begun. Before delivery to Philadelphia, Bob Leith, one of our Trustees, assisted in performing an initial careful digital scanning of the oaths, and one of those is pictured here. It is our hope, of course, that some donor or donors will be willing to step forward and help to fund the cost of preservation treatment for these fantastic pieces of history. We will pursue that further upon receipt of the estimated cost of treatment. In the meanwhile, at least we can reassure Mr. Vosseller and Mr. Dilts that we have not proven unworthy of their trust.