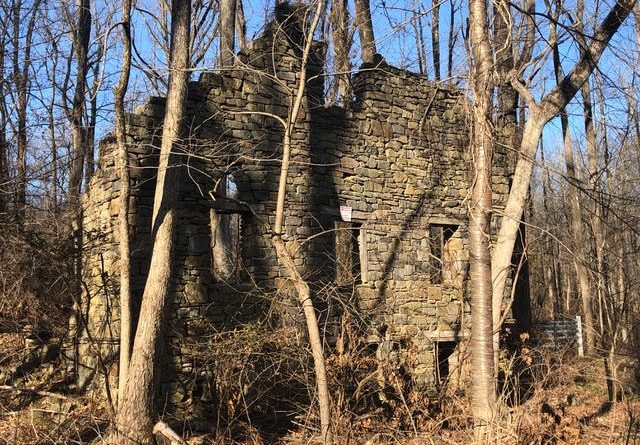 If you drive the length of Rocktown Road, you pass the solitary stone wall shown in the photo. If you conclude it is the remains of the Sked Distillery, you’d probably be right. (WARNING: this is on private property and in no condition to be approached, so let the photograph serve as your visual).

Born 10 April, 1821, Simpson Stout Sked attended the Pennington Seminary in 1841, a Methodist Episcopal college prep school established in 1838. Following this path Simpson would have led a very different career from what is seen in the censuses. The 1851 Cornell County map shows “S. Sked” in the location of the existing ruins. The 1860 Lake & Beers map shows “S. S. Sked” and a “Distillery” here. “S. S. Sked” owned 3 more buildings around Unionville, and a personal estate valued at $9,000 (in excess of $280,000 today). He is listed as a farmer in both the 1850 and 1860 censuses, but the “non-population” censuses in both years are too faded to read, so both his farm and distillery products are speculative. Given his personal estate, I assume Simpson was distilling apple whiskey well before 1860. In 1862 he was taxed on 126 gallons of “spirits”. The 1863 and 1864 tax records show his occupation as “distiller Apples” and ”Distiller”, respectively, and his products were valued at $119 in 1865. Simpson was taxed as a distiller rather than a farmer. Daniel Dorchester’s 1884 book, “The Liquor Problem in All Ages”, suggests Americans consumed over 700 million gallons of American distilled spirits per decade from 1850 to 1870. So the distillery business was probably pretty good, the tax monies used to pay for the on-going Civil War.

Simpson died intestate on 27 July 1868, leaving a 42-year old widow, a 20-year old son, Richard, and a 10-year old daughter, Lavina. Simpson’s mother was a Stout, so he is buried in the Stout-Manners section of the Wertsville Union Cemetery on North Hill Road. Simpson’s widow, Hannah, was granted guardianship of their daughter. Oddly, in 1873 guardianship was reassigned by the Court to neighbor Levi Hixson. Clearly the women remained close living together after Lavina’s 1878 marriage to Isaac Van Doren Losey. (The last name will be familiar to anyone who drives Wertsville Road). They are enumerated together from 1880 to 1905.

By 1870, 22-year old son, Richard, had a personal estate of $10,000, likely reflecting his position as the sole male heir who inherited his father’s estate. The 1873 East Amwell Beers “Business Notices” lists Richard Sked as an “Apple, whiskey distiller” with a post office address in Ringoes. The 1870 agricultural non-population census shows Richard as a farmer (rather than a distiller) with 111 improved acres. Richard was doing reasonably well, financially speaking. But the bottom fell out of the tub in the 1870s when the financial “Panic of 1873” ruined many people. It appears to have taken its toll on Richard, too, because the 1880 census shows him as a 32 year old “laborer” with a checkmark in the box for the “Number of months this person has been unemployed during the Census year”. His spouse, Bessie, is shown as “Keeping House”. In the 1900 Federal census Richard returned to “Farmer”, but Bessie was a “School Teacher”, a career she pursued for another 40 years. The fact that the couple had a servant in 1900 suggests they recovered from their losses, but perhaps Bessie’s career would provide an additional cushion against the vagaries of the late 19th century economy.

Speaking of vagaries, with present Global Markets swinging wildly, it is interesting to note that $10,000 in 1870 wasn’t worth $10,000 again until 1917! Also, search “Panic of 1873” on your computer. Its background is well beyond the scope of this article.

So, as we practice “social distancing”, “self-isolation” and watch financial markets tumble, remember this country has seen many times of uncertainty. Yet… here we are!