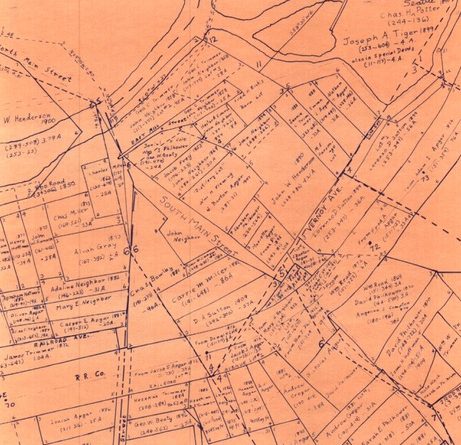 Map 137 in the Society’s Map Collection is an interesting compilation. In 1978 William H. Bender undertook a revision of a 1915 D. Stanton Hammond map of the Califon area, showing the early landholders of what is now the Califon Borough (Figure 1). Although mills existed along the River for much of the early settlement’s duration, it was quite a while before growth truly started, driven by the arrival of the railroad in the mid-nineteenth century, which followed the South Branch of the Raritan River. The area that became Califon was a station on the High Bridge Branch of the Central Railroad of New Jersey (CNJ), which started in High Bridge, connecting the CNJ main line with the iron-ore mines in Morris County to the north.

So, what was Califon? Initially called California, from enthusiasm in the milling business about the time California gold-fever broke out, there are two explanations for the name shortening. First, perhaps apocryphal tale, is that the name was shortened to fit on the welcome sign. A second theory holds that the name was related to a bright yellow cattle feed sold here during the Gold Rush.

The Borough was formed officially from Lebanon and Tewksbury Townships in 1918.
In 1976, the Califon Historical Society submitted an application to register a National Historic District. Highlighting 170 structures, Califon is a well sign-posted Victorian Village with houses marked with builders’ names and dates of construction.

What makes this map remarkable is its detail. It would be a genealogist’s treasure, especially if you are researching Apgar or Philhower ancestors! A.J., Nicholas, Marietta, Fred, Casper E., Oliver… perhaps several generations of Apgar family settled here in the mid- and late-19th century (Figure 2).

On the outskirts, the major landholder was Robert R. Livingston (Figure 3), who held substantial acreage and apparently sold it off in the early 19th century. Due to the constrains on researching in our State Archives I am confined to internet, searches. I have been unable to determine who this Livingston is. Is he a relative to New Jersey’s first governor, William Livingston? I found a probated will of Robert R. Livingston (William’s father), showing he had purchased land in Essex County, and the “Amboy Ferry”, but nothing in Hunterdon County.

But “The Early Germans of New Jersey…” contains a chapter on the Tewksbury Township settlers and mentions “the Livingston tract”, stating “the land was simply leased for a period and was not sold until about 1790 or later.” This may explain the comment “chain of tenures” included in many of the Livingston tracts (Figure 4).

Andrew Melick, Jr. authored “The Story of an Old Farm; or, Life in New Jersey in the eighteenth century”, which contains much genealogical information, but nothing that reveals what Livingston’s origins are. Regardless, this and the previously mentioned book deserve the attention of Hunterdon County genealogists.

More recently, the Califon bridge may be featured in Frank Capra’s 1946 movie, “It’s a Wonderful Life”. It was also home to TV personality Merv Griffin. Not every town can make these boasts!