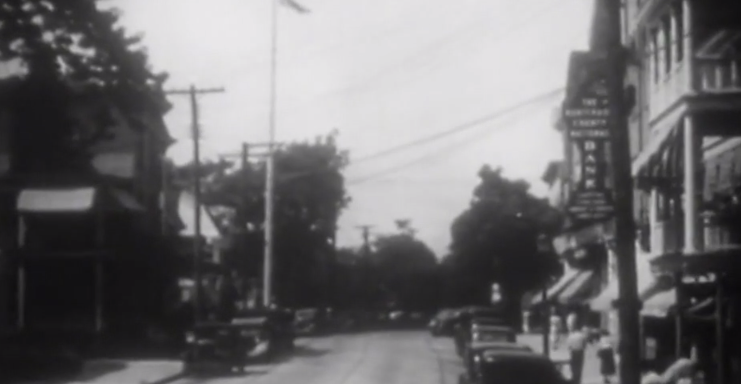 View a little slice of Flemington from 1939!

The HCHS would like to take a moment to feature something unique in our collections. “Money at Work” was a movie partially filmed in Flemington, NJ, in 1939. It was most likely a “short”, a term used for a film less than half an hour that acted as a prelude or an intermission filler in movie houses during the earlier days of the big screen.

The film itself is “a story about business and banking, about people and money and work.” It explores the relationship between banking and news operations, focusing on the Associated Press. The film provides a tour of AP headquarters at Rockefeller Center, showing the various offices, communications equipment, and employees, interspersed with stock footage of noteworthy past news events. To illustrate how financial transactions work, two checks are followed from the workplace to the bank. Bank scenes show people, documentation, processing, and machinery. Towards the end of the film, there is a transition from AP operations to the office of a “country newspaper.” This segment of the film includes interior and exterior shots of The Hunterdon County Democrat office and other businesses in Flemington, N.J., as well as local citizens and street scenes of the town. Aside from the film’s obvious historical significance, it provides a unique visual glimpse of Flemington in 1939.

Attached, please find a link to the pertinent 2 minutes and 33 seconds of the film that is located in Flemington. Some of the people and places in the film are known. The office of the Hunterdon County Democrat is shown, along with the editor, Howard Moreau. Hiram E. Deats is shown visiting the newspaper office. And later, “John Doe” the reporter is shown in the lobby and along the exterior of the Hunterdon County National Bank. – View Film Here –

Some people and places are not known, however. Who is the female clerk Mr. Deats speaks to in the office of the Democrat? Who is the teller at the bank? And who is “John Doe” – is that a real reporter for the paper, someone played by an actor, or a made up character for the short film?

Who are “Mrs. John Doe” and their son? Mrs. Doe and the boy enter a general store – what is the store, and who is the proprietor? They also enter a butcher shop – whose store is that, and who is the butcher? If anyone who remembers Flemington at that time (and we realize that this was a long time ago!) can help identify those people, we would love to hear from you!

A movie film donated by Anne Moreau Thomas in 16mm original format, this film was preserved and duplicated for the Hunterdon County Historical Society by Film Technology, Inc. through a grant from the National Film Preservation Foundation. The film was produced in 1939 by the American Bankers Association. It has a runtime of 24 minutes, 11 seconds. A viewable DVD version of the film is maintained in the Hiram E. Deats Library; it is filed with the office copy of the inventory for the collection. To view the film, please ask the librarian or reference assistant for assistance.