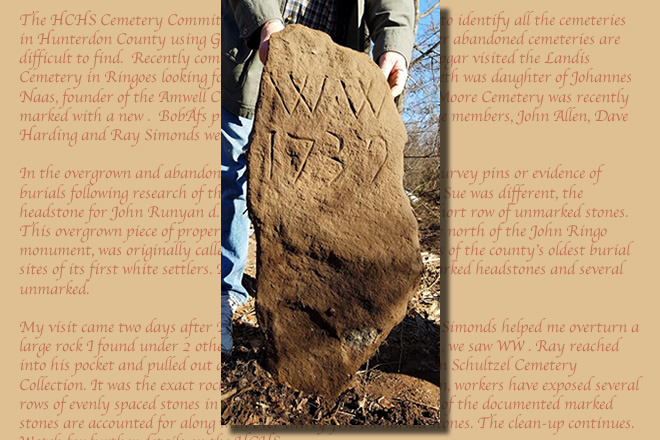 The HCHS Cemetery Committee has had a three-year mission to identify all the cemeteries in Hunterdon County using GPS coordinates. Many of the older abandoned cemeteries are difficult to find. Recently committee members Bob Leith and Sue Apgar visited the Landis Cemetery in Ringoes looking for the burial site of Elizabeth Naas. Elizabeth was daughter of Johannes Naas, founder of the Amwell Church of the Brethren whose own grave in Moore Cemetery was recently marked with a new headstone. Bob’s previous trips with other committee members, John Allen, Dave Harding and Ray Simonds were fruitless.

In the overgrown and abandoned cemetery, they could not find survey pins or evidence of burials following research of the cemetery boundaries. This time with Sue was different, the headstone for John Runyan d. 1815 was discovered as well as a short row of unmarked stones. This overgrown piece of property in East Amwell, a quarter mile north of the John Ringo monument, was originally called Harley Burying Ground and is one of the county’s oldest burial sites of its first white settlers. A 1918 Hiram Deats list documented eight marked headstones and several unmarked.

My visit came two days after Bob and Sue’s exploration. Ray Simonds helped me overturn a large rock I found under 2 others. There, in plain chiseled letters, we saw WW 1739. Ray reached into his pocket and pulled out a picture copied from HCHS’s Ron Schultzel Cemetery Collection. It was the exact rock we were standing over! Since then, workers have exposed several rows of evenly spaced stones in neat north-south patterns. Four of the documented marked stones are accounted for along with over thirty-five unmarked stones. The clean-up continues. Watch for further details on the HCHS website.