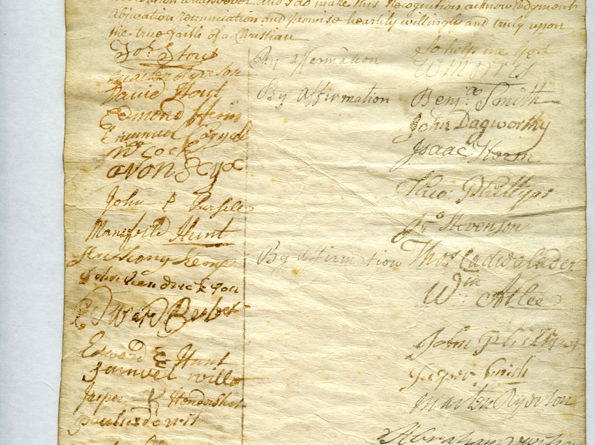 Recently the Hunterdon County Historical Society rediscovered two related documents dating from 1744-1758: Oaths of Abjuration and Oaths of Fealty. These parchments tell the story of the elected or appointed officials in the colony who had to swear that they rejected the authority of the Catholic Church and who had to swear their allegiance to King George 11. They serve as a virtual “who’s who” of the County that once stretched into Trenton and include the signature of a signer of the Declaration of Independence, John Hart. The history of the parchments, when they were first discovered, was originally detailed in an article in a 1901 Jerseyman, an early publication of the Society, still held in the Library’s collection.

Recognizing the importance and rarity of the parchments, the Historical Society contacted the Society of Colonial Wars in the State of New Jersey. The society’s funding priorities include the restoration and physical preservation of documents dating to the Colonial Period in New Jersey between 1607 and 1775. “The parchments were a perfect project,” says Glen Beebe, Grants Committee Chairman, “they show the political turmoil in New Jersey caused by the Jacobite uprising.” The Society awarded the Hunterdon County Historical Society $6,000! The preservation work is being completed at the Conservation Center in Philadelphia. Once the parchments are preserved, a viewing will held at the Society with the Society’s manuscript curator so the public can learn more about the documents, its signers and this early period of New Jersey’s history as a British colony.

In operation since 1885, the Hunterdon County Historical Society’s mission is to collect, preserve and share the history of the entire County of Hunterdon. The Historical Society maintains The Hiram E. Deats Memorial Research Library, the Doric House Museum and a state-of- the art climate controlled archive building in Flemington, New Jersey. The Society’s research library is open to the public year-round and serves thousands of researchers in its library and through our website.