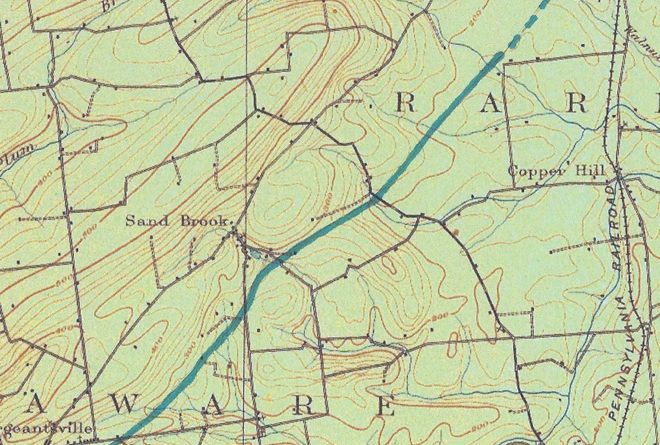 ONE HOUSE LEADS TO THE HISTORY OF AN ENTIRE AREA

The area north and east of Johanna Farms Road has turned into a fascinating subject to research. I started out with the farmstead owned by “Mrs. Hoagland” and found myself branching out to include her parents, the Carmans, and her neighbors the Higgins. The rail line passed through all their properties, so I was not really off topic. But perhaps most intriguing was learning about the Carman cemetery, located on the Higgins farm, where two Revolutionary War veterans are buried.

Today’s post was a challenge because interesting information kept popping up, and no one is standing over my shoulder telling me to cut. So instead of writing about all the properties between Johanna Farms Road and Flemington, I only managed one. And there are several more in the works. Read the full article.

Corrections to Family Trees
Sometimes it can be very difficult to keep track of the people I’m writing about. That is why I began doing family trees on the website. I hope they have helped, but preparing them has also been of benefit to me, showing up inconsistencies, or people incorrectly labeled as children or spouses. This week, two cases in point:

The Rockafellar Tree
While researching a property further east along Johanna Farms Road, I found some errors in this tree which I have corrected. I also discovered that one of my readers, who will go unnamed, had already copied that tree to his page on Ancestry.com. I found this a little disturbing, since I don’t really consider myself that much of an authority on Rockafellars.  If he wants to keep the tree linked to his Ancestry page, I hope he will take it down and replace it with the corrected version.

Despite making corrections, I am still very uncertain about the family of John Rockafellar and Margaret Kitchen, and their son Peter. There far too many Peter Rockafellars to sort them out.

The Bellis Tree
Don’t know how I missed this. It was staring me in the face! David Bellis and Eleanor Schenck, whom I wrote about in The Old Lequear Farm,  had a daughter Mary/Maria whom I listed as unmarried, when in fact, she was the wife of Derrick A. Sutphin, the very Derrick who had purchased The Township Farm that I wrote about recently, bordering the farm of David & Eleanor Bellis. (Egg on face) Another example of how all these 19th century families seem to fit together into an enormous web of relationships.

The Trout Tree
One of my readers found a missing Trout, Mary Louise, daughter of Rev. Henry Fisher Trout and Mary Catherine Vandolah, and wife of John L. Larason. She has been added to both the Trout and Vandolah Trees.

Thoughts on the Times
I am old enough to remember the 1960s, and the echoes of those days ring loud. However, 2020 is its own time, and so far I am hopeful that the outcome will be better. This time we have the video of George Floyd’s death to remind us of how serious this is, and to keep us white folks from forgetting that.

I am encouraged by the way so many are now reviewing the assumptions we’ve made in the past. It has occurred to me that most of the people I write about were property owners, the people who were relatively successful in life. Sure, most of them worked very hard and were not all that rich, but they show up in recorded deeds, mortgages, wills, etc., which makes it possible to find out about them. People who could not own property got left out. They are mostly invisible. Many of those people were black. They do appear in census records and occasionally in deeds, where they are always designated as black, colored or mulatto. During the long era of our history when slavery was considered legitimate, that was understandable. Not so much any longer. There are times when making distinctions is appropriate, like census records, and times, like buying land, when it is not. And yet, as an historian, I value the information.

Even though the lockdown is starting to end, the virus is still among us, people are still dying. Please be careful and stay safe.
Marfy