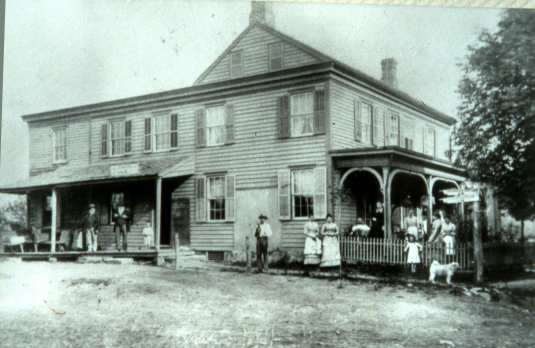 This week, a straight forward re-publication of Egbert T. Bush’s article on “Crosskeys Tavern” in Rosemont.

Mr. Bush was writing about the old Rittenhouse Tavern on the corner, which is now for sale. He provided so much material in his article that it seemed best to just publish the whole thing, and then follow up with my comments in a subsequent article. Well—probably “articles.”

The tavern’s current owners have taken excellent care of the old place, and it needs a new owner who also cares about old architecture and local history. I am hoping to raise awareness of this interesting place and its long association with the Rittenhouse family.

One of the stories Mr. Bush tells is of Isaac Rittenhouse’s slave Cato, who lived during the American Revolution. As it happens, according to the Hunterdon Republican, the last remaining slave in Hunterdon County also lived in Rosemont, as it reported on March 27, 1868:

“Bob,” the last remaining slave in Hunterdon Co. The man named Bob, or Robert,  belonged to the estate of John Waterhouse, Sr., dec’d, of Rosemont. Provisions of his Will set up a fund for the purpose of taking care of Bob and stipulated that he should be well clothed and lodged, and by no means abused by rude, inconsiderate persons. He is now in his 75th year and living with the family of Ingham Waterhouse, near Sandy Ridge, where he has been kindly treated and cared for. The executors of the estate that have seen to the welfare of Bob are Thomas Lequear and John W. Lequear.

I have done little research on the Waterhouse family, but I have learned that the John Waterhouse mentioned here was a bachelor all his life, and a very prosperous one. In the 1850 census, he was a farmer living in Delaware township, age 78 with land worth $5,000. Living with him were Lavina West, age 57 (no doubt his housekeeper) and Robert (black) age 56. In the 1860 census, after the death of John Waterhouse, Robert Waterhouse (colored) was living in the household of Ingham Waterhouse, John’s cousin.