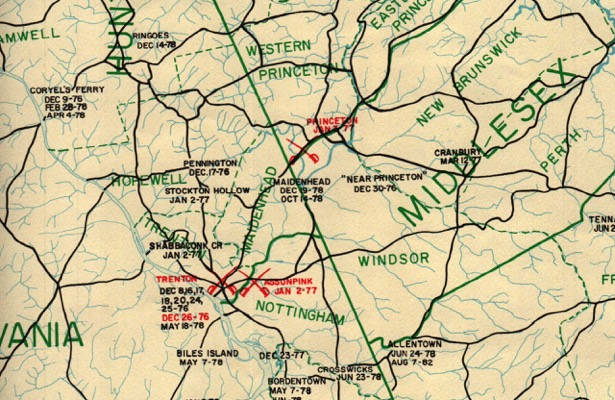 You may remember the June Collection Gem was a letter summarizing the proceedings of a 1774 meeting in New Brunswick to the Freeholders of Alexandria Township. The result of that meeting summarized New Jersey’s loyalty to King George III, but aired its grievances against Parliament. The following year revealed the error in thinking the King was blame-free in these grievances. The storm burst, resulting in eight years of civil war between the Kingdom of Great Britain and the fledgling United States of America.

The Hunterdon County Historical Society Map Collection houses five copies (Maps 139, 140, 141, 181, and 301) of a map compiled by the State in preparation for the United States’ Bicentennial year of 1976. New Jersey is known as “The Cockpit of the Revolution” and this map supports that statement. Figure 1 is the title block for the map and concisely summarizes what the map contains. Specifically, it identifies some 300+ battles and skirmishes that were recorded in diverse source materials. Some actions are very well-known; the two battles of Trenton and the Battle of Princeton that occurred in what are now know as “The Ten Crucial Days” (Figure 2). Others are not battles, but much smaller confrontations, some of which did not result in casualties.

David C. Munn produced a companion booklet to the map, containing a brief description and “bibliographic references” for each action. These vary in availability from the Archives of the State of New Jersey to the less accessible New-Jersey Gazette newspaper. The State municipalities shown represent the State as it was at the time of the War. The same can be said of the shoreline, which has continued to be sculpted by the Atlantic Ocean for over 200 years. Figure 3 describes the basis for the map and provides a useful primer on the geographic features represented thereon. The resulting map was a joint effort by numerous organizations; some state, others “private” (“Sons of the American Revolution”, for example).