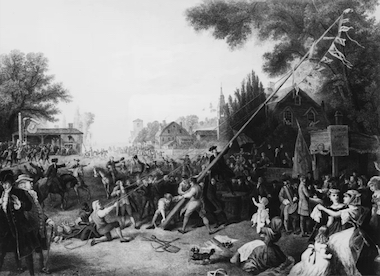 This week, another diversion from my series on the railroad that never got built. (I’m beginning to wonder if it also means a series that never got finished.)

I won’t attempt to explain what triggered my interest in today’s article, but you can assume politics had something to do with it. Today’s article appeared many years ago in a precursor to today’s Delaware Township newsletter, The Bridge. This earlier newsletter was called The Post, for which I wrote some history articles. I  hope to eventually get all of them included on this website. Today’s article seemed the most appropriate.
Pole Raising in the Days of Lincoln (https://goodspeedhistories.com/pole-raising-in-the-days-of-lincoln/)

This one is somewhat disturbing. It discusses the election of 1860 when Hunterdon County was still voting Democrat, and when Democrat meant more or less what Republican means today—basically very conservative. But in 1860, conservative meant preserving the institution of slavery. And the fact that my own township of Delaware voted overwhelmingly against Lincoln in both the 1860 and 1864 elections is some history I regret, but cannot deny.

Included in the article is an interesting little precursor to the separation of the area around Stockton from Delaware Township and its creation as a Borough.