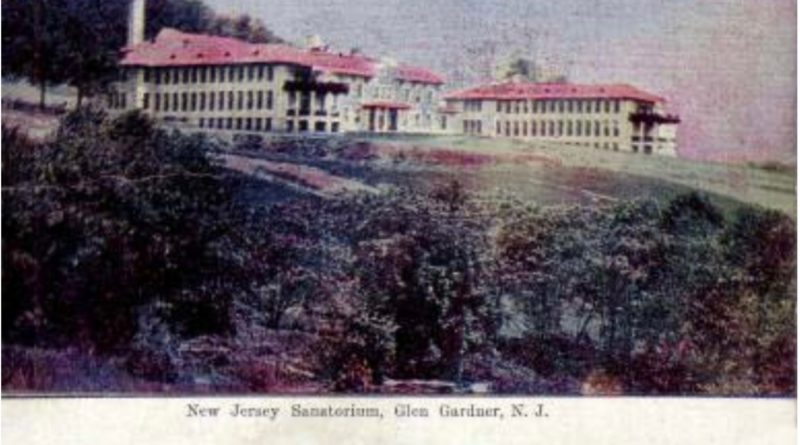 Variously known as consumption, phthisis, and the white plague, it is thought that by the beginning of the 19th century tuberculosis claimed 1 in 7 people who had ever lived. And TB was the leading cause of death in the United States between 1870 and 1920! Once thought to be hereditary, experiments in the 1860s confirmed TB was contagious. In the 1880s the Mycobacterium tuberculosis bacillus was identified and related to “standards of public health”. This led to the first public health campaign in US history, and to the fresh air and labor “cure”.

Map 192 in the Society’s Collection, dating to 1939, shows the sprawling Sanatorium complex built outside Glen Gardner in the first decade of the 20th century. Because the grounds are no longer open, and are off-limits to the public, we are fortunate that photographs of the Sanatorium are available on the West Jersey History website, and that it was photographed and mapped during the 1930s Historic American Building Survey (HABS), a Work Project Administration effort. Here are the links to both sets of photographs:

Figure 1 shows a map scale of 1” = 200’, indicating the map is very large scale (remember: “the larger the number, the smaller the scale”). The grounds of the Sanatorium covered 600 acres, mostly preserved as open space, as you will see when you look at the photographs. The satellite images available on Google Earth suggest the area has been reclaimed by dense forest.

Figure 2 is a scan showing most of the buildings in the complex superimposed on a topographic map with 10 foot contours, showing the Sanatorium grounds characterized by rolling hills. As a result, much of the map is “scenery”, so I include a couple photographs from the the West Jersey History site, available online at the link above. I also include the photographs because the map is uncolored and perhaps not very “picturesque”. Try to locate the camera position honoring the topography and the road network as well as buildings, but the years between the photographs and Map 192 render this uncertain. But it is a particularly interesting exercise! Figure 3 is a colorized photograph (postcard?) of the main complex buildings, shown in the center of the map, recognizable by the flanking buildings with the rounded fronts.

Figure 4, entitled “Among the Daisies”, shows a group of children, likely patients, with what I think is the women’s dormitory in the background. These children – if patients – would have been living in a building (Figure 5) separate from the adult patients, a very enlightened philosophy for the early 1900’s. The photo appears to be taken from the southwest on land donated by Joseph Fritts, and also shows what might be the main administration building between the large dorms (a photo of the men’s dorm is shown in Figure 6).

As for the history of the place, the Sanatorium was opened in 1907 as the only state-owned and operated Tuberculosis Sanatorium. In 1950 – well after the HABS work – the Sanatorium’s efforts broadened to include all chest disease patients. Twenty years later the State closed the it, but in 1977 State Senator Garret W. Hagedorn reopened the complex as a Geriatrics Hospital. The facility catered to older adults with psychiatric issues and was renamed the Hagedorn Geriatric Psychiatric Hospital. Subsequently, the hospital clientele included adults of any age with psychiatric issues. The State closed the facility in 2012, along with several other State-run psychiatric facilities, and the complex has been vacant since that time.

Given the highly contagious, airborne transmissive, nature of tuberculosis, I am amazed at the compassion shown by someone who worked in the early sanatorium! (Look at Figure 7, the Superintendent’s Residence, and determine where it is…). And the scourge of TB is still with us. The World Health Organization released a report in 2009 suggesting that some half million new cases of multidrug-resistant TB are reported annually!