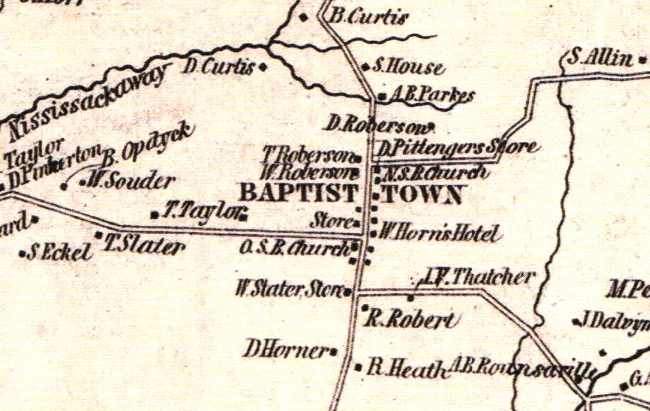 Normally, I only send out a newsletter when I’ve published a new article on Goodspeed Histories. But sometimes I think of things that are time sensitive, and this is one of them.

The Caucus Tradition
Yesterday and today, Democrats have suffered a considerable amount of angst over the failure of their reporting system in the Iowa Caucus. Some people may be wondering what the deal is with caucuses anyway.

It is important to understand that a caucus to select nominees for political office is nothing new. Through much of the 19th century, this was the usual approach taken by political parties. As Ben Zimmer wrote in “Primary Colors (https://blog.oup.com/2008/01/primary_caucus/) ”:

Before the advent of direct primaries for the election of presidents and lesser officeholders, candidates for the major political parties were nominated by local policymakers in small meetings known as caucuses. The origin of the word caucus is not certain, but the best guess is that it derives from the Algonquian word cau’-cau’-as’u meaning ‘adviser.’ Though there is no direct evidence of this etymology, it seems plausible given that the earliest known caucuses were clubs in New England, where the use of Native American names was quite popular.

Perhaps the earliest instance of its use was in 1763 by John Adams.

In the 19th century, caucuses were held in Hunterdon County to decide candidates from the lowest to the highest level. Every town ran a caucus, and sent delegates to the state caucus. Sounds like “small-d Democracy,” but, of course, no women or people of color participated, nor did anyone who wasn’t fully engaged in local politics. And it was not fool proof then, just as it isn’t now.

In fact, the first year that the Hunterdon Republican was published, 1856, one John Sine of Kingwood, a candidate for county sheriff, announced “To the Voters of Hunterdon County. Believing that owing to fraud, forgery and gross misrepresentations, I had not fair play at the Democratic Caucus, I now announce myself as an independent candidate for the office of Sheriff of the county of Hunterdon. By the advice of many of my personal and political friends I have taken this course, and whatever may be the result, I am willing to abide by the judgment of my fellow citizens.” The winner of that election was George B. Holcombe.

In 1860, the County Convention held in Flemington received a report from the committee to determine what changes should be made to the caucus system. They decided, by a vote of 11 to 5, that no changes were required. I’d love to know what prompted creation of this committee.

In 1868, a man named Edward Farmer of Flemington declared that “Whereas, it has been told and circulated that at the recent caucus in said county, I had received five hundred dollars as a bribe to defeat William S. Riley by running myself, and that Richard Bellis and Peter E. Voorhees did give me the said money – now be it known, that I do hereby swear that I did not get money from either of the said gentlemen, or of any other person, for the purpose above mentioned.”

Interestingly, the Democratic party held a convention to “ascertain the results of the township Caucuses,” and found that Mr. Riley lost out to Richard Bellis by 128 votes. Mr. Farmer only got 391 votes, but if those votes had gone to Mr. Riley, the results would have been quite different.

The Republican reported that “The nomination of Bellis caused much grumbling on the part of Mr. Riley and his friends, who claimed that the nomination had been obtained by fraud, and for a time the Democracy were in great tribulation lest Mr. Riley should “kick out of the traces” and run independently. We see, however, that he has been “whipped in,” and comes out in a card, in which he says that although he is satisfied he has been cheated, he “waives his own feelings for the good of the party,” and look for redress to the party organization in the future. We suppose, this to be the promise of the Sheriffalty the next time.”

The term “the Democracy” was often used by Republicans to denote members of the Democratic Party. Thankfully, the lingo of the 19th century has pretty much faded away.

Granted the problems I have mentioned were not necessarily caused by the caucus system itself, it does suggest that perhaps the time has come for this 18th & 19th century tradition to be left behind.

There is certainly much more to say about caucuses in 19th-century New Jersey. Perhaps at some future time I can delve more deeply into the subject. In the meantime, if you’d like to learn more about the origins of the word ‘caucus,’ check out this article by J. L. Bell in Journal of the American Revolution: “Birth of the “Caucus (https://allthingsliberty.com/2013/11/birth-caucus/) .”

Once again I am so tangled up in the history of properties between Sergeantville and Sand Brook, that I need to take a break, so I’ve turned my attention to a completely different subject.

This time, I am responding to a recent conversation on the newly created Facebook group: “Historical Kingwood Township.” It concerned the surviving ancient buildings in the village of Baptistown. Realizing that Egbert T. Bush had written about the village, it seemed appropriate to publish it this weekend, along with my comments.

And once again, there’s just too much to say in just one article, so there will be a part two coming along soon.

Baptistown One of Hunterdon’s Oldest Villages

Thoughts on Valentine’s Day
I scrolled through the Abstracts of the Hunterdon Republican looking for the first use of the term Valentine’s Day, and did not find it until February 22, 1893, when “Brief News from Clinton” reported that “A Valentine Sociable was given at the home of Edward B. Bryan, last Wednesday evening.”

That was the first of several notices in the years 1894-1900 concerning various ways of celebrating Valentine’s Day:  a Valentine Oyster supper at the residence of Thomas B. Hampton at Croton;  a valentine and bazaar sociable to be held a the home of James Ramsey, Sr. in Lebanon Township; a “Valentine and Clipping Social,” at the home of Nathaniel Higgins of Ringoes. All of these events were sponsored by Ladies’ Aid Societies or Ladies Home Circles, connected with the local churches. Kind of odd, considering that the day had come to mean the celebration of romance.

The only other references to the word Valentine were to people’s names—usually surnames, but sometimes given names. No one appeared more often than Valentine Young of Bloomsbury.