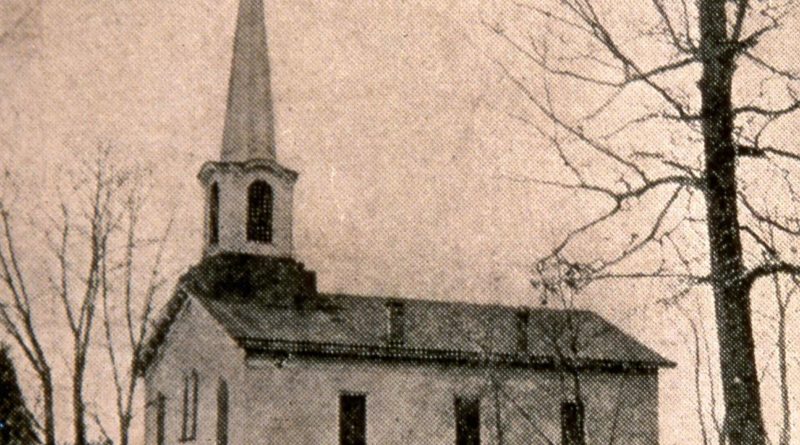 And we’ll end the year with a look at the neighborhood of Sandy Ridge. Marilyn Cummings has prepared an application for an historic district for that area, but no decision has yet been made. So the area does deserve some attention. Also, this past October, the Sandy Ridge Church celebrated its 200th anniversary!

I’m starting off with an article by Jonathan M. Hoppock published in 1905, and following up with one by Egbert T. Bush. They were two very different historians, as you will see.
Sandy Ridge Church

My practice these days is to publish a family tree or two for families connected with the current article. For Sandy Ridge that was something of a challenge since there are several families from that area. I chose three for this week (Hunt, Butterfoss and Vandolah) and will publish more when Mr. Bush’s article comes out.

I am a little embarrassed to admit how easily I get off subject. It had been my intention to do a series of articles on the residents of Rosemont and its surroundings. So far I’ve only written about the southern half of the village. It is still my intention to focus on the northern half, but for now I am taking a detour to the neighborhood of Sandy Ridge.

House Histories in 2019
Have you been thinking of researching your own house lately but put it off because it is too daunting? Maybe I can help. On January 20, 2019, the Lambertville Historical Society will be holding its annual meeting, at which I will talk on the challenges of researching your own property. If you’re interested, visit the website at https://lambertvillehistoricalsociety.org/

Christmas Spirit
Mentions of Christmas in the Hunterdon Gazette, which began publishing in 1825, did not appear until 1857. But during the Civil War hardly anything was said about it. It did not become a federal holiday until 1870.

That first year, 1857, the news concerned a parade to be held on Christmas day. These days, we too have a Christmas parade, in which “marching bands, Mummers and floats” march down Flemington’s Main Street, as reported in “Tap Into Flemington.” But these parades take place a couple weeks before Christmas. Holding a military parade on Christmas day would not pass muster these days.

In the issue of the Gazette dated Dec. 16, 1857, a “GRAND MILITARY PARADE AT FLEMINGTON ON CHRISTMAS” was announced. Several military companies were invited, especially The Flemington Guards, along with “Coon’s Cornet Band.” “Indications are strongly in favor of a good time.” Despite this prediction, apparently it was not a complete success. The editor wrote a review of the event in its Dec. 30th issue:

“CHRISTMAS DAY.─ The Military Parade, in Flemington on Christmas Day, was a grand affair, as we previously represented. The only Company from abroad, however, was the Delaware Guards. They performed first-rate, as usual. The Flemington Guards didn’t turn out as strong as they were expected to; whether old King Alcohol countermanded the orders of Capt. [James] Bamford or not, we cannot positively say, but we have such suspicions. This is no fault though, of Capt. Bamford’s. He took his handful of men and made them perform as well as could be expected, taking into consideration many difficulties he had to contend with. Capt. B. is a thorough military man, and we are only sorry that there is not enough military spirit in Flemington to afford him a better opportunity to display his military tact. We don’t wish to be understood as speaking disparagingly of the parade. On the contrary it was quite interesting, but after the Delaware Guards and Capt. Bamford get their share of credit out of the
affair, we fear the remainder would be small.”

Happily, this year’s parade was far more successful.
Best wishes for a Merry Christmas and for the happiest of holidays!
Marfy