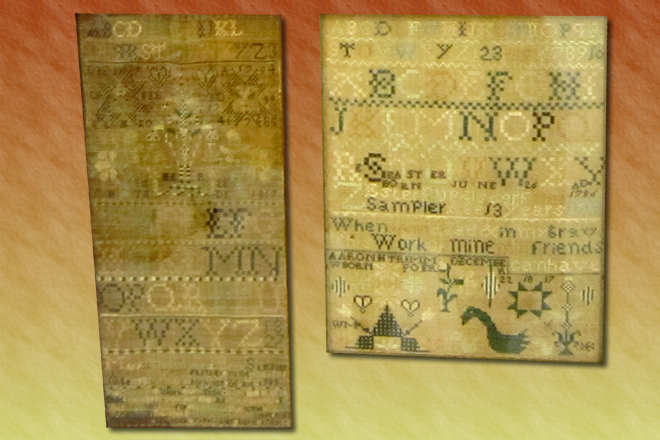 Before Dan Campanelli passed away, he and his wife, Marty, worked on an article for American Ancestors, a quarterly magazine put out by the New England Historic Genealogical Society based in Boston. The historic-minded couple had already written three articles for this publication over the past few years, all on New England embroideries.

Recently, the Campanellis proposed an article spotlighting Hunterdon County history—a part of history usually kept hidden within a family. Two teenage girls from a relatively poor family of German origin resided on Croton Road in Kingwood (now Franklin) Township. Their last name was Popelsdorf, and each stitched a needlework sampler as was the custom at the time–Esther in 1809 and Mary in 1811. Esther got pregnant out of wedlock and delivered a son in December of 1817. What’s unusual is that both sisters revisited their needlework projects after the baby’s birth and stitched his name and birth date on each of their samplers!

Mary’s sampler was featured in the Campanellis’ book A Sampling of Hunterdon County Needlework, published by the Hunterdon County Historical Society in 2013. The illegitimate child’s name was cryptically stitched around a design on the sampler, and a descendant in the 1970s misread the name as something else. When the Campanellis discovered Esther’s embroidery coming up at auction in 2014, the actual name of the infant—Aaron H. Trimmer—was revealed in cross stitch, and the connections made clear. Mary’s sampler has remained in the family and is currently in the possession of her great-great-great-granddaughter, Lisa Zambito.

The Campanellis thoroughly researched legal documents at the Hunterdon County Records Management office, located at the County Complex on Route 12, and were able to discern the fact that the father of the child, Aaron Trimmer (c.1794-c.1844) took off for parts unknown. But he didn’t travel very far, for in 1822 he was charged with the exact same crime right across Delaware River in Northampton County, Pennsylvania. In fact, a sheriff was dispatched to go hunt for Aaron. Because of his repeat performance, the Campanellis affectionately referred to the baby’s father as ‘the scoundrel.’

So what happened to Esther, the mother of the baby, later in life? Where did the runaway father end up? And what about the illegitimate child? The fall 2017 issue of American Ancestors tells all, and highlights early Hunterdon history to all who read this members-only magazine available now. If you aren’t already a member of NEHGS (they have over 220,000 constituents worldwide) who receives this fine publication, you may view the article at AmericanAncestors.org/hunterdon-sampler. A copy will also be available for your perusal at the Hunterdon County Historical Society.