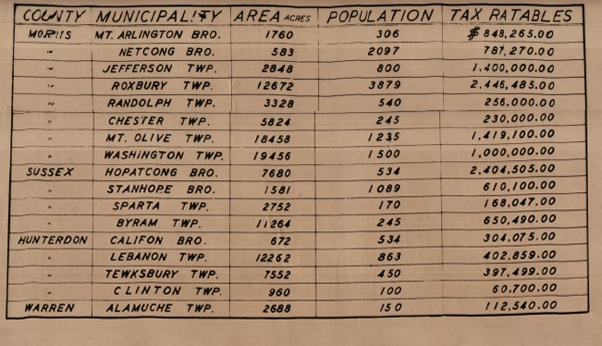 Did you ever wonder what Hunterdon County might have looked like if others had their way? Hunterdon County has often been eyed covetously for its abundant water resources. The result? Round Valley and Spruce Run reservoirs, created in 1960 and 1964, respectively. For the record, the Wanaque Reservoir was created in 1928 and is the second largest in New Jersey, smaller than Round Valley. But what about the Bunnvale reservoir? It was proposed but never undertaken. What and where was this project? The Society’s Map 28 (Figure 1) can help!

The December 24, 1931 New York Times ran these headlines “ADHERES TO WATER PLAN.; New Jersey Board Expects to Push Bunnvale Reservoir Project.” showing many power brokers publicly supported the plan. Closer to home, the January 27, 1933 edition of the Hackettstown Gazette contains an article in which Chairman of the State Water Policy Commission, Willard I. Hamilton, suggests opponents of the reservoir “are willing to make statements without regard to their accuracy” and that “[p]roperty owners will be paid a fair price and would not be put to any necessary expense.” Reading the contemporaneous accounts, it’s amazing the reservoir was never created.
John Kuhl’s article in the Winter 2017 HCHS Newsletter about “Hunterdon History That Never Happened – What Might-Have-Been” describes what the project would have been:
“In the 1930s the state intended to dam the South Branch of the Raritan River from the High Bridge gorge back up that stream, inundating Califon and flooding it to Long Valley. It was dropped when the money in the depression time could not be raised. But it led, not long after WWII, to the construction of Round Valley and Spruce Run reservoirs. Hunterdon had little say in these reservoirs and, except for perhaps maintaining stream flow, was never able to even extract permission to use any of the water.”
A Supreme Court ruled in 1931 that “the use of the waters of the Upper Delaware River Basin for municipal water supply has precedence over all other purposes”. Specific findings and rulings can be found here:
https://www.law.cornell.edu/supremecourt/text/283/336
“The injunction prayed for by new Jersey so far as it would restrain the State of New York or City of New York from diverting from the Delaware River or its tributaries to the New York City water supply the equivalent of 440 million gallons of water daily is denied, but is granted to restrain the said State and City from diverting water in excess of that amount.” So, the Supreme Court ruled in favor of the project – with conditions. It was this ruling that led to the 1932 map in the Collection.

As John mentioned in his article, the Great Depression rendered the project financially unattractive. But the proposal was resurrected in 1948 with the “primary purpose… to meet the prospective water supply requirements of metropolitan areas, within and without the Basin, in the States of New Jersey, New York and Pennsylvania”. The Interstate Commission on the Delaware River Basin (Incodel) was created to “promote interstate cooperation for the conservation and protection of water resources of the Upper Delaware River Basin” for the benefit of the populations of the three named States. Almost 21,500 acres of Hunterdon County would have been submerged, including much of Lebanon Tewksbury and Clinton Townships and the Borough of Califon (Figure 2, rotated counterclockwise). Important to the proponents of the reservoir were the fact that these areas were characterized by lower population densities than some other areas, so tax revenue would not be significantly affected should these 2000 people be displaced if the area proposed was flooded to create the reservoir. In the end, alternative projects were found to be more attractive and the Bunnvale reservoir site was found to have some unattractive aspects (a likely permeable substrate, for example) and was never undertaken.

It needs to be remembered that this population figure predated the post-War boom and the Interstate Highway system that resulted in significant growth of the area; so significant that the Highland Act of 2004 was enacted to (among other things) slow its population growth. Northwestern Hunterdon County would have been a very different place had the reservoir been created, flooding the areas shown graphically in Figure 2 and tabulated in Figure 3.