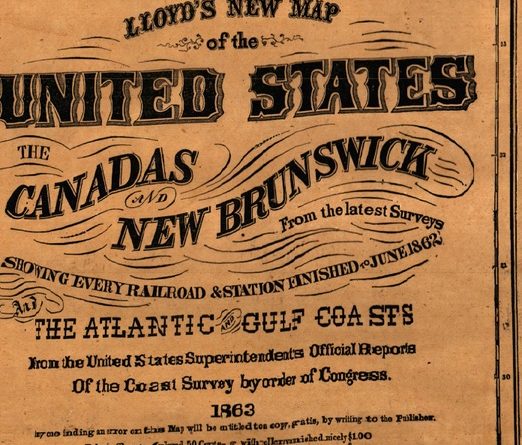 Gems HCHS
October 1, 2019September 30, 2019 phyllis hartzell
Authored by: John Allen,  johninretirement@gmail.com
It’s 1863 and the United States is in a rebellion threatening the unity of a country only 87 years (“four score and seven years”) old. The Union forces in Virginia have suffered a significant loss along the Rappahannock River outside the city of Fredericksburg. Confederate offensives were turned back in two late 1862 battles in Tennessee and Kentucky, but there is no end in sight to this unnatural war. In hindsight, Map 91 in the Hunterdon County Historical Society’s Map Collection supports the way forward. The map title (Figure 1) contains the magic words “…every railroad & station…”. Upon inspection,. attention is drawn to the spider webs at critical railroad junctures, key positions in a relatively modern war. New Jersey (although misshapen on the map; Figure 2) illustrates the degree to which Northern connections existed between critical areas. Railroads running across the State connect the coal fields of Pennsylvania with New York’s industries and port facilities; the population centers of that City with Philadelphia and points south (including Washington D.C.); and the iron mines of northern New Jersey with both its source of fuel (Pennsylvania’s coal fields) and its market (New York’s foundries). As in the Revolutionary War, New Jersey was “a barrel tapped at both ends”.
Compare the network of railroads in the Northern States with those of the South. Notice the difference in Figure 3. Note the density of railroads (represented by thicker black lines) in the State of Ohio – a significant contributor to the Union war effort – to that of neutral Kentucky and of western Virginia. Recognizing this may reflect difficult terrain in western Virginia and Kentucky, I include Figure 4, showing the Confederate state of Virginia. The key observations are that railroad networks are much more developed in the Union (Ohio in Figure 3) than in the Rebellious states (Virginia in Figure 4). Also note the two most obvious points of railroad convergence in Virginia: Richmond and Petersburg. By the end of 1864 Union forces have both cities under siege. But that was in the future when Map 91 was published.

In 1862, Corinth, Mississippi was the focal point of the Union army’s attention due to its rail network, a fact made obvious in Figure 5. With the fall of Memphis, Corinth became a crucial link between the west and eastern Confederacy. Historian Peter Cozzens wrote “[t]he loss of Corinth would play havoc with Confederate lateral communication, cutting off Southern forces operating in the upper reaches of the Trans-Mississippi region, particularly Arkansas, from the Confederate heartland.” When Corinth fell in May, 1862,  supplies flowing west to east had to be transported via Jackson, Mississippi, greater than 200 miles further south, adding significantly to the logistical problems faced by the Confederacy.

Figure 6 illustrates why Chattanooga and Atlanta were also coveted by the Union. These two rail junctions were major objectives in the 1863/4 campaigns of the Union armies, effectively eliminating other west – east logistical networks.

These victories were in the future when Map 91 was published. At the time Map 91was published Union thinking was dominated by the need for water transport, meaning the Mississippi River, a fact made abundantly clear by the letter from Secretary of the Navy Gideon Welles included on the map (Figure 7). But the country was shifting from river to rail, evidenced by the rapid expansion of railroads following the War. The capture of major north-south rivers was important to the Union cause, but I believe it was the capture of key railroad centers that led to Union victory. Among the key “thinkers” in this paradigm shift were Generals Grant and Sherman. But while they were quick to grasp the significance of railroads, it was President Abraham Lincoln who wrote to Major General William Rosecrans in 1863 “If we can hold Chattanooga and East Tennessee, I think the rebellion must dwindle and die. I think you and [General] Burnside can do this, and hence doing so is your main object.” Greatness at the top was definitely an under-appreciated Union asset!