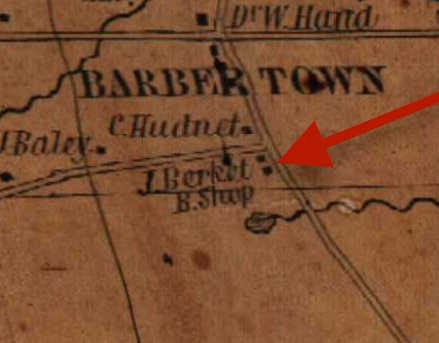 place over a short period of time. The Society has multiple vintages of such maps for Hunterdon County. This article focuses on a small portion of Kingwood Township near Barbertown/Larisonville, noting some of the changes seen between 1852 (Figure 1) and 1860 (Figure 2). In the Society’s Map Collection maps 48, 53, and 111 are the 2nd edition 1852 Samuel Cornell map, (the 1st Edition county map – Map 45 in the Collection, was published in 1851 and copies are available for purchase from the Society). Maps 1, 24, 25, 42, 204, and 205 are copies of a “Map of the Vicinity of Philadelphia and Trenton” from 1860 by Lake and Beers, including Hunterdon County.

North of town the Springhill School is shown on both maps (Figures 3 & 4) at slightly different locations comparing its location against the course of modern Horseshoe Bend Road. Does anyone know if this was this a drafting error, or was the school building moved in the 1850s?

The 1860 map shows a “Mr. Mettler” living on the west side of  modern CR 519. He is identified as “L. Mettler” on the 1852 map, likely Levi Mettler on page 142 of the 1850 census. This is supported by the presence of Francis Roberson, John Rittenhouse and Wesley Bellis following Levi’s family on the same census page. Compare this sequence with the 1852 map in Figure 3 and you will note these heads of household follow modern CR 519 North, indicating the route of the census taker.

Another observation… South of the town (Figures 5 & 6), in the southwest corner of modern CR 519 and the Barbertown-Idell Road, is the residence of “J. Berket” and a blacksmith shop. The 1850 census shows a farmer (but not a blacksmith…), John Burket, age 76. His eldest son is Sylvester, age 28. John passed away in November 1859 so he is not included in the 1860 census. However, Sylvester is, living with Charles Burket, age 50. My guess is that Charles is Sylvester’s older brother. The 1860 map shows the same location is occupied by  “C. & S. Burkit”. No doubt a little more research would clarify (confirm?) their relation. THAT would be gratifying! If there’s anyone working on this genealogy, please comment on the Facebook posting.

A little inspection of the maps shows several houses remained in the same hands for this 8 year span: “D. Vansyckle”, “J. A. Rose”, “W. Sarch” or “Search”. Mr. Sarch also had a school slightly south of his residence, northwest of the house of “C. Kugler”. Speculation: west of Barbertown (Figures 7 & 8) is “T. Laquear/Laqueer” (farmer Thomas, in the 1850 Census)  whose brother, John W., purchased land northeast of Thomas before 1860.  The 1860 map has both individuals. It also shows many of the homesteads were named: “Rural Retreat”, “Hillside”, “Evergreen”, “Peachgrove”, and “Willow Grove” (Thomas Laquear’s home) among others.

In closing, here’s a question to ponder: in 1852 Barbertown existed, becoming Larisonville in the 1860 map. Why? Note there is a “Dr. G. H. Larison” on the 1860 map. But Dr. William Roy Hand (born in Basking Ridge 15 December 1798) lived at the northwest corner of the intersection in both maps, so why not name the settlement Handville? (Side note: Dr. Hand’s family is enumerated in the Federal censuses of 1830 through 1870, so he was a long-time resident). Any thoughts?