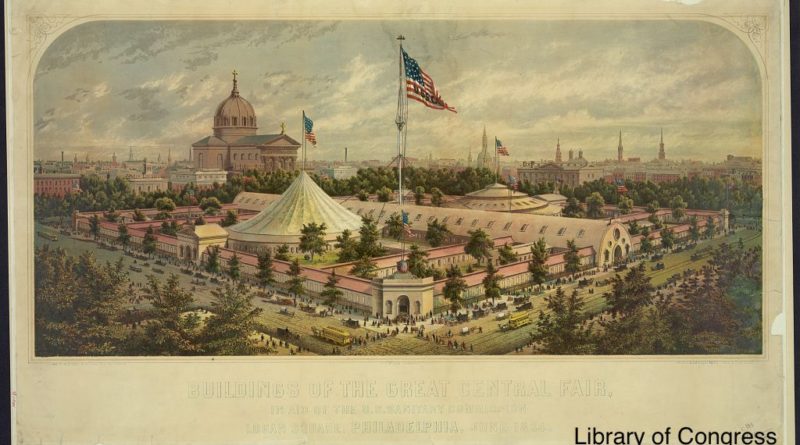 Overshadowed by Philadelphia’s Great Centennial Exhibition in 1876 is the “Great Central Fair”, held in a 200,000 square foot building in Philadelphia’s Logan Square June 7 through 28, 1864. The Fair, the last – and, attended by some 250,000 people, one of the largest – benefiting the efforts of the United States Sanitary Commission. The Fair celebrates its 155th anniversary this month (June 2019), a time to remember a very successful event and its contribution to the relief of Union soldiers and their survivors. Figure 1 is a print of the Fairgrounds from the Library of Congress website. Even President Abraham Lincoln attended the Fair on June 16 with his son Tad, selling 48 signed copies of his Emancipation Proclamation for $10 each. Only 26 are known to have survived, with 20 framed in public institutions. One in private hands was purchased at auction in 2016 for $2.17 million!

The Great Central Fair was held during General U. S. Grant’s “Overland Campaign” (May 4 – June 24, 1864) which ended with Union troops besieging the key Confederate Virginia cities of Petersburg and Richmond. The Campaign cost Union forces over 55,000 casualties (killed, wounded and missing), about 45% of the Army of the Potomac’s strength at the Campaign’s outset. The proceeds of the Fair almost assuredly benefited New Jerseyans, many of whose spouses, fathers or sons – particularly in the 15th New Jersey Infantry Regiment – numbered among the casualties. The 15th regiment lost over 70% of those involved in a single day’s assault at Spotsylvania Courthouse on May 12, 1864. and, since about 25% of the regiment’s soldiers were recruited in Hunterdon County, it is almost a certainty that the largesse of the Sanitary Commission found its way to needy County people. Figure 2 is a photograph of the monument to the 15th New Jersey at “The Bloody Angle” in the Fredericksburg and Spotsylvania National Military Park, dedicated on the 45th anniversary of the battle in 1909.

The entry fee to the Fair, the proceeds from the sale of various goods on display, and charitable donations to the Sanitary Commission at the Fair, raised more than $1 million for the relief of Union soldiers and their families. One of the souvenirs available for purchase was a commemorative token pressed by the U. S. Mint in Philadelphia, an example of which is in the Civil War Collection at the Hunterdon County Historical Society (Figures 3 & 4, obverse and reverse, respectively), measuring 58 mm in diameter. Smaller copper and silver tokens – about the size of a modern dime – were also available for 10 and 50 cents, respectively.

The Commission’s leadership apparently did not approve of the excitement and lavishness of the fairs, wanting to encourage sacrifice as a component of membership in a nation. But the work they did surely improved the lives of those who sacrificed for the Union. It should be noted that both the U. S. Christian Commission and the U. S. Sanitary Commission corroborated to provide medical services to Union soldiers. Consider them the “Wounded Warriors” organizations of their day. I am interested in how Union soldiers and their families were financially cared for by the United States, for whom they sacrificed their health, sometimes their lives, since an ancestor of mine lost his eye (and his livelihood) on May 6, 1864 at the Battle of The Wilderness early in Grant’s Overland Campaign. Never having met my ancestor or his family does not prevent me from being thankful for the Commission’s efforts to alleviate their daily struggle.