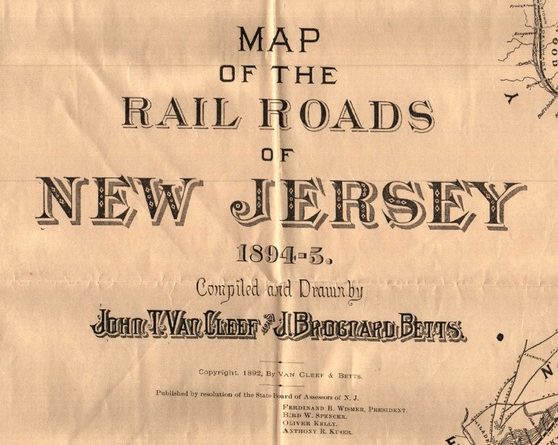 Last month’s Collection Gem featured a map of 1871 State Railroads. This month we highlight Map 219, “Map of the Railroads of New Jersey”, carrying a date of 1894-95 (Figure 1). But why was it copyrighted in 1892? Regardless, the changes in almost 25 years were dramatic!

The New Jersey West line, proposed across Hunterdon County and crossing the Delaware River at Milford, (Figure 3 of the July 2019 Collection Gem), was never completed. Originally chartered in 1865, it was revised in 1867 and ’69 when it was authorized to build a bridge to Pennsylvania from Milford. Since there was no railroad on the Pennsylvania side near Milford common sense prevailed, and the line was never completed. Only part of the line was built, and it remains in use today as NJT’s Gladstone Branch between Summit and Bernardsville. The lines that DID service the County, shown in

Figure 2, included the Flemington & Raritan South Branch RR, the Central RR of NJ and its South Branch (discussed in last month’s Gem), and the Easton and Amboy Railroad. Construction of the latter began in 1872, but halted at Pattenburg when funds ran out prior to completion of a tunnel through the Musconetcong Mountain. It was purchased by the Lehigh Valley RR and completed in 1875, connecting the Lehigh Valley Railroad coal hauling operations in Pennsylvania with consumers in the New York City vicinity.

The difference in the southern line through Raritan and Delaware Townships reflects a merger in 1885 when it became the Belvidere Delaware RR running to Flemington Junction. (Now the Black River & Western Railroad, as discussed last month).

Last month much discussion centered on railroads bringing mine products to market. In the Sussex County portion of this 1894-95 map (Figure 3) it is obvious this is still a significant objective in rail construction. Spur lines ran in Sussex County to Branchville, and to the Ogden Mine via the Ford Mine. Franklin (and its mine) was an important junction. Some of the smaller spur lines in the northwest of the State have obvious advantages. For example, look at the track from the Ogden Mine. In 1871 it terminated at the northern end of Lake Hopatcong, where iron ore was transferred to barges which brought it to the Morris Canal. This route was open only during months when the Lake was not iced over. By 1894-95 the rails bypass the Lake so the extracted iron ore could be transported to market year-round, no longer requiring an ice-free Lake. What is also apparent from inspection of Figure 3 is the incredible degree of “over-building” of railroads. This is even more evident in northeastern New Jersey (Figure 4) which also very effectively conveys visual evidence of New York City’s importance to the industrial economy. Notice how many lines converge on the docks in Jersey City where freight was barged across the Hudson River to Manhattan’s consumers!

Many lines existed on the drawing board in 1871, and the 1894-95 map reveals competition rather than cooperation drove the different companies. Without a topographic overlay it may be unfair to judge, but there are many parallel lines that look redundant. The result was substantial capital expenditure and negative economic effects. Reading the Wikipedia entries for these lines reveals many went into “receivership”. Consolidations were frequent, with the result that many of New Jersey’s railways are now hiking or biking trails, and the State’s railroad industry is dominated by two freight (CSX and Norfolk Southern) and two passenger lines (New Jersey Transit and Amtrak). Sure, there are many small regional lines like the Hudson Bergen Light Railroad, but these do not – and cannot – compete with the lines listed above. This exercise made me think of Steve Goodman’s “City of New Orleans” song…