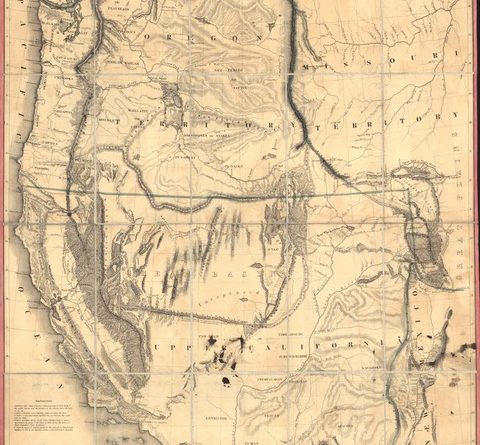 What comes to mind when you hear the name John Fremont: an engraving of a one-armed explorer rafting white water down the Grand Canyon? “The Pathfinder” was not simply an adventurer. He also undertook extensive surveys during his western exploration, the results of which were incorporated in the Society’s Map 56 (Figure 1; from the David Rumsey Map Collection, courtesy of cartography associates at DavidRumsey.com. The Society’s map is water damaged on the left side – visible as darker spots on Figure 2).

More important than the fact that Fremont’s survey was used (with others) to map the great Western lands, is the fact that the map illustrates the result of President James K. Polk’s “Manifest Destiny” philosophy. One of his campaign slogans was “Fifty-four forty or fight!”, a rallying cry for those who desired the Oregon Territory’s northern boundary be established up to Russian America (Alaska) border. President Polk was elected President of the United States in 1844, and in 1845 (after he was sworn in) commenced work on America’s expansion to fulfill its “Manifest Destiny”, in which he was a firm believer. But having been elected, Polk saw that a war with Great Britain was best avoided, and negotiated the 49th parallel border for the Oregon Territory, today’s accepted international boundary from Minnesota to the Pacific Coast (with the exception of Vancouver Island). This map reflects both this border with British Canada and the acquisition, through the War with Mexico from 1846 to 1848, of California, Arizona, New Mexico, Nevada, Utah, and parts of Colorado, Wyoming, and Texas.

As alluded to, the northern boundary of this map reveals the seeds that almost led to a third war with Great Britain in 75 years: the boundary between the United States and western Canada, then a British possession. But it also reveals the southern and western boundaries that show the huge expanses of territory acquired from Mexico… “purchased” for $15 million under the Treaty of Guadalupe-Hidalgo that ended the conflict. This fueled the continuing debate about the westward expansion of slavery which led to the American Civil War only 13 years later.

Figure 3 shows the southern border coinciding with the Gila River as “indicated by the ratified treaty with Mexico February 2nd 1848”. The Gadsden Purchase of 1854 added another 29,670 square miles south of the Gila River, land eventually utilized by the southern route of the transcontinental railway. Also shown are the numerous Indian tribes occupying these lands. Some are familiar to me: Apache, Navajo, Yuma. Others are less so: Chemeguabas and Genigueth, for example.

Figure 1 is very illustrative of how the Great Basin was named, surrounded by mountains as it was mapped. Interesting is the fact that the southern part of the Basin is “Unexplored”, as was the east-west trending mountain range forming the southern boundary of the Basin, “being seen only from elevated points” (Figure 4). Geologists would be hard-pressed to explain the trend of this “Dividing Range”, since much of what is referred to as the “Basin and Range Province” resulted from east-west extension of the area. This mountain chain and the one forming the northern boundary of the Great Basin were mapped as the dividing ranges separating the drainages of the Pacific and the Great Basin. A look at current satellite images (or maps) will reveal such mountain ranges don’t exist as they were mapped in 1848.

Figure 5 amply demonstrates how Colorado was partitioned into “Parks”. Should you ever wonder why there are North, Middle, and South Parks, see the map. (By the way, the darker east-west lines in the figure are folds in the map, NOT mapped mountain ranges!)