Through the generosity of the Astle-Alpaugh Family Foundation, this iconic collection has been digitized for greater access.

In 1891, an energetic young man named Hiram E. Deats had just joined the Hunterdon County Historical Society. Finding the records and papers of his new Society were not quite up to his expectations of organization, Deats asked to be named the group’s librarian. He soon found that as librarian, not only was he in charge of maintaining the Society’s own records, he was also responsible for acquiring and cataloging new material for the Society’s collections. In that very same year, the Capner family home in Flemington was set to change hands and might even be demolished. In the attic of the home were found, however, a treasure trove of family papers. The Society was notified, and the papers were collected and noted by Mr. Deats, making this one of the oldest manuscript collections in our possession. 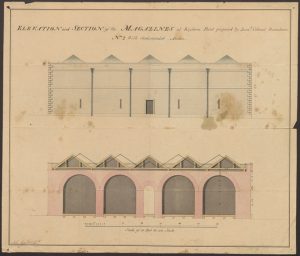 The Papers: Joseph Capnerhurst arrived from England to America at Philadelphia in 1786 and stayed with his Uncle John Hall at the Coltman’s (family relations) family home there. His uncle and father had already been living in Philadelphia since the mid 1750’s. He purchased a farm in Flemington later that year. The farm, called Long Range Farm, was part of the original Kase tract, and is situated entirely in the Borough of Flemington. In 1787, the rest of the Capner family arrived from England. Living on the farm was Joseph, his mother Mary, his brother Thomas, sister Nancy, his Uncle John Hall, Isaac Passand, William Gilbert, and several servants.

John Hall helped Joseph to improve the farm tremendously, building outbuildings, an irrigation system, and a workshop for his own inventions and engineering efforts. The farm became very successful. John Hall was a well-known engineer and inventor in early America, who maintained a large correspondence and work record with many known personages in Philadelphia, and beyond. Some of his correspondence includes letters back and forth with Thomas Paine, James Watt, and others.

In 1793, Mary Choyce, a milkmaid, arrived from England, and married Joseph’s brother Thomas. Joseph passed away in 1809 and left the farm to his oldest son Thomas. Thomas was a successful lawyer who also served several terms as county justice (both for the court of common pleas and the justice of the peace). A large portion of this collection includes case files from Thomas’ practice as an attorney and as a judge of the county. 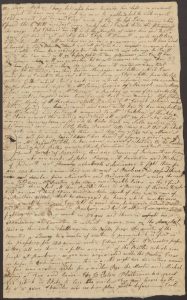 In 1822, Thomas sold the farm to his younger brother Hugh Capner. Hugh operated the farm, still with various relatives living there, until 1836. He then sold the property to the Flemington Mining Company, and moved the family to another house in Flemington. When these papers were discovered in the attic of the second Capner home in the area, there were letters and papers from several generations of the Capner family and many of the residents who had lived with them. Joseph and Mary Capner, John Hall, Thomas and Mary Capner, their daughter Mary, their distant relatives Isaac Passand and William Gibson, all lived there and wrote letters to each other when separate and back and forth to friends and their relations still living in England.

In the subsequent generation, John Hall Capner, the Exton Family, the Choyce family, Thomas Capner and his wife, Hugh and his wife Matilda, all spent time living at the farm. The letters and legal papers left behind by this regionally important family tell a story of life in early America. The members of this family touched the heights of fashionable society but also reflected rural life in America and England. John Hall’s letters reflect his time while the family lived in England, but also had many pieces and much information from the revolutionary period as well, when he lived in Philadelphia. The second generation left us a wealth of Hunterdon county court records that tell their own story of the region in the time period of the early 19th century.

All in all, this is a remarkable collection of documents that tells the story of both an American family, and that of Flemington, Hunterdon County, and the evolution of American Society. Before now, this collection was only available for viewing and research in person. Through a generous grant from the Astle-Alpaugh Family Foundation, the collection has been digitized. The collection has had its inventory moved from a paper document into our electronic catalog and so can now be accessed through our website. Even better, almost one thousand documents have been attached to the electronic record for viewing, and are available for viewing through the online search portion of our website! If researchers wish to view other documents associated with the collection, they are easily available by contacting the Society. We hope you enjoy the greater access to this important collection, and hope that it continues to prove an important source for local history information in the future. CLICK HERE to access the digitized files.