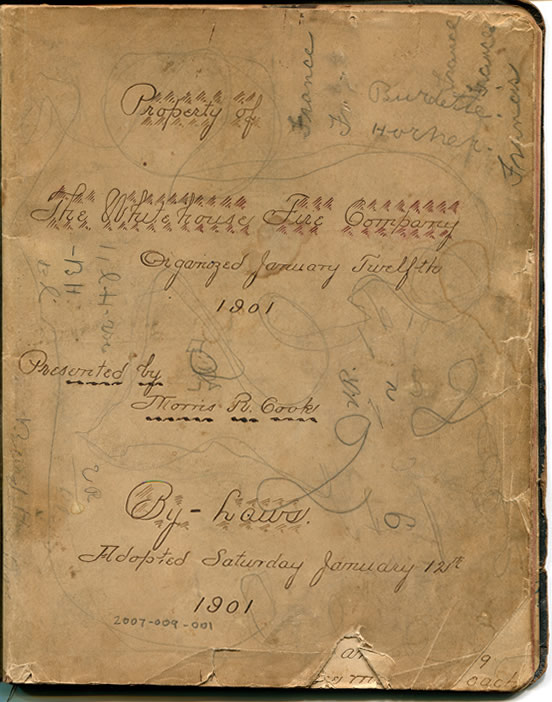 Ask just about any archivist that you know (if you know any), and they will tell you that they love their job. Why anyone would love a job that requires painstaking and tedious sorting, cataloging, boxing, and cleaning of old records is hard to understand for people who do not choose this path to make a living. But the fact remains that despite the tedium, archivists do love what they do. For most archivists, the process of creating order out of chaos is rewarding in and of itself. But another part of this love is the occasional diamond in the rough; the thrill of unearthing a historically important document or photograph that turns up unexpectedly and provides a key piece of information for a researcher or genealogist.

I was fortunate to have that thrill of discovery recently while cataloging some manuscripts that had been donated to the Historical Society in 2009. One of the items was an innocuous looking volume, rather thin, with a lot of doodling on the front cover. Rather amusingly, the cover was entitled Whitehouse Fire Company, with a representation of flames penciled in above the name. More historically interesting was the information contained within: a constitution, by-laws, original membership list, and attendance log that were the formative documents of the Fire Company starting in the year 1901.

Later that week, I shared this discovery with one of my volunteers. Dan Leechan is one of my veteran archival volunteers. He has processed several collections for the Society, is always ready to help out in whatever way he can, and he is also just one heck of a nice guy. He also happens to be a member of the Whitehouse Fire Company. When I showed him the manuscript, he was really surprised, and thoroughly interested. He took several images of the manuscript to show the gang back at the Firehouse.

When Dan returned the next week, he asked me if he could copy the manuscript using our digital scanner. As it turns out, Dan’s father, who is a past Chief and an officer of the Fire Company, was astounded by the volume. As far as anyone in the Company knew, their history could only be traced back to 1922. There were some members who thought the Company may have been a little older than that, but no one could prove it beyond their oldest documents from the early 1920’s. Now, the Fire Company can pinpoint not only their year of formation, but also the names and details of their charter members.

These are the kinds of discoveries that may be small in the larger context of history, but are very meaningful on the local level of history. Not only do these finds provide a momentary thrill for the archivist and the volunteers, but they also validate both the work and the mission of the Hunterdon County Historical Society. The mission of our institution is, simply, to collect, preserve, and share. By doing so, we get to reconnect people to their past, just as we did with the Whitehouse Fire Company. And it is also one of the things that can really make an archivist love their job.