Once again, I have more research to do before publishing part two of my history of the Union Hotel on Main Street, Flemington. In the process of looking for mentions of Neal Hart, the 19th century tavern owner, I came upon an advertisement in a Philadelphia paper that included a long list of Flemington residents. Taking a closer look at it, I thought it was pretty amazing, so I’m publishing an article about it today.

Flemington’s Pulmonic Tonic
A Flemington drug maker listed the town’s most eminent citizens in his advertisements.

Tavern Licenses
Part of my research on the Union Hotel involves the tavern license applications on file at the State Archives and available for viewing on Family Search, which I mentioned in my previous newsletter. The applications include signatures of people endorsing the tavern applicant, and it is those original signatures that make these records so valuable. I shared one of the applications with Kingwood Twp. historian, Betty DeSapio, who noted that they served as a Who’s Who for the late 18th and early 19th century.

Signatures can tell you a lot about people’s personalities. Some are so shaky, they seem to be written by men who are either unwell or drunk. On the other end of the scale are those who seem to have a high opinion of themselves, as shown in this sample from the petition of James W. Hart of Sergeantsville, May 5, 1829. J. T. Blackwell and Alexander Wurts gave some flourishes to their signatures, while Thomas Godown could barely write his. 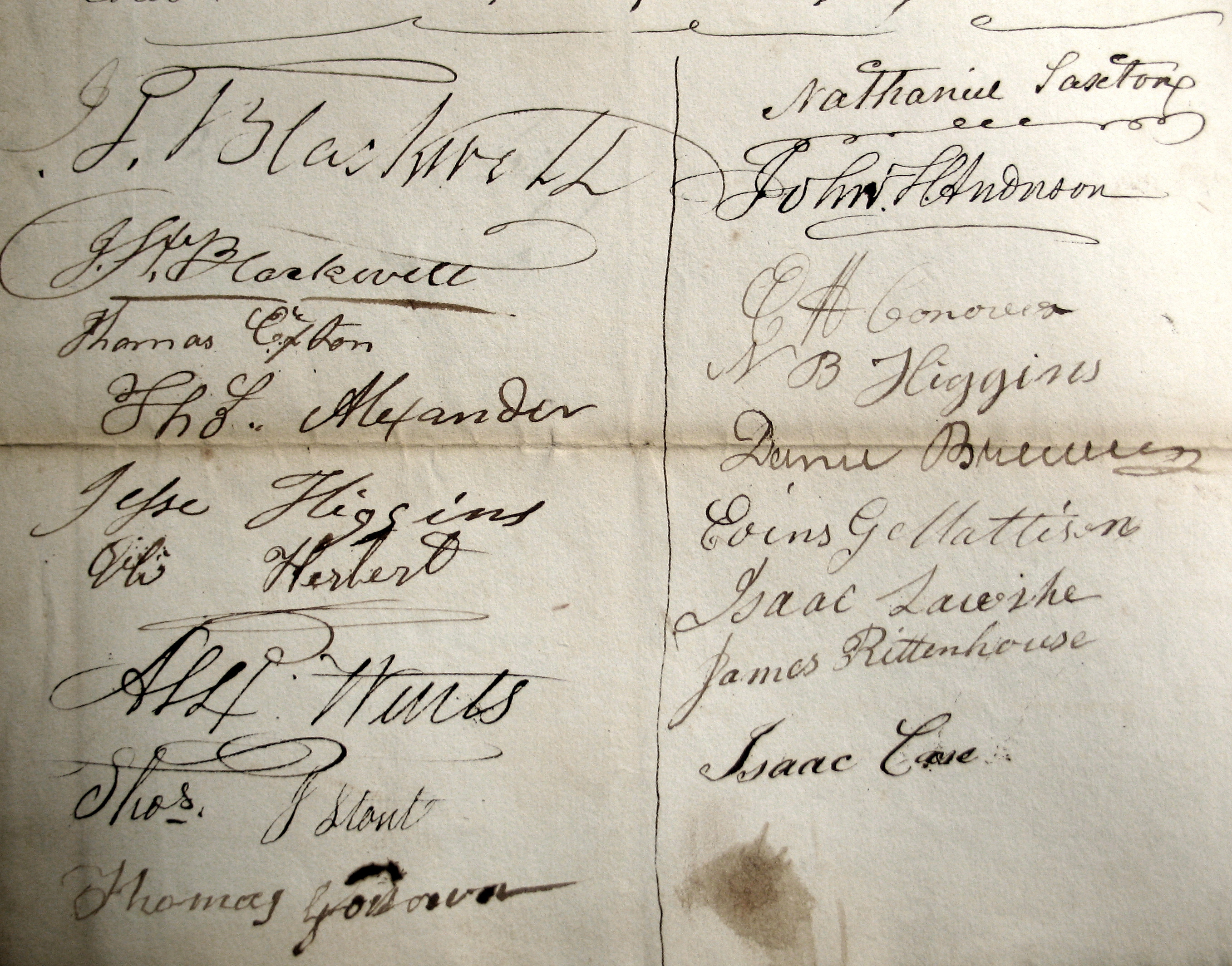 Speaking of the Kingwood Historical Society . . .
The Society is meeting the second Monday of every month at the Municipal Building on Route 519 north of Baptistown at 7:30 in the evening. Recently, Kingwood Township historian, Betty DeSapio, made a presentation regarding the old Ambrose Barcroft farm on Featherbed Lane. It had been rumored to be the childhood home of Mary Woolverton, wife of Daniel Bray. Betty found that was not the case, and several Kingwood histories will need to be revised to take her research into account.

Indigenous People’s Day
Back on 10/12/2021,  the Hunterdon Co. Historical Society posted this item to Facebook:
“With today being Indigenous People’s Day, it recalled to mind one of the most fascinating items in our collection. This is the pipe bowl that Leni-Lenape Chief Tuccamirgan gave to his “blue brother” Johan Philip Kaes (later Case) as a sign of their friendship. The Chief died in 1750 and is buried in the Case Family Cemetery off Bonnell St. in Flemington. The bowl remained in the Case family for a number of generations before being donated to the Hunterdon County Historical Society during the 1920s.”
Included with the post was a photograph of the pipe, and to tell the truth, I was disappointed that it did not show more of the pipe. I hope they try again with a more complete photo. Even better, visit the HCHS on the days they are open and ask to take a look.

A Glitch?
On Monday, Oct. 11th, I got sent by WordPress or MailChimp (can’t tell which) the article Summit School, part two, which was published back on May 25, 2021. It occurred to me that subscribers to my newsletter might also have gotten it. If so, my apologies. I have no idea why it was posted.

Best wishes,
Marfy
P. S. The newsletter is a way to share tidbits of history that I don’t plan to write articles about. This one was much longer than normal.

I have just published part one of a study that has long been ‘in the works,’ and that is:

The Union Hotel, part one

It has been a treat investigating what Flemington was like in its earliest days, how surveys were drawn and properties were created. I learned about people involved in the town’s early settlement that I had never heard of before, as well as some familiar names like Lowrey.

As part of my research I came upon a wonderful resource, which I mentioned in my previous newsletter, the Tavern License Petitions that are on file at the State Archives and are made available online by FamilySearch. For those of you who are curious, you can see them here: Tavern Licenses.

More History Online
Recently FamilySearch announced that after 83 years, it had finished digitizing its microfilm collection. This resource is invaluable! Here’s the Story.

A Correction
In my previous article, I wrote about the abundance of oysters and the fondness people had for them, served “in every style.” I wrote that it was thought unsafe to harvest oysters in months with an R in their name. A couple readers pointed out to me that I had it reversed–oysters were not harvested in months without an R, i.e., May through August, the warm months when, according to a real life oyster farmer, a bacteria would bloom that would make digesting raw oysters a painful process. That error has since been corrected.

Pursuing Local History
That advantage of warm months, along with the fact that many people have now been vaccinated against the Covid virus, is that local museums are reopening, for instance, The East Amwell Museum, located at 1053 Old York Road in Ringoes. In addition, the Delaware Township Historic Advisory Committee is in the process of writing up a brochure “to help current and prospective residents understand how they can learn more about the town’s history, the history of their own home, and to clarify what it means to live in a historic district.” Part of the brochure will include a FAQ section and the DTHAC encourages residents or future residents to post their questions on the Committee’s Facebook page. Please feel free to contribute.

History & Archaeology in Hunterdon County
This announcement appeared recently: The Archaeological Society of New Jersey  (ASNJ) in collaboration with the Hunterdon County Cultural & Heritage Commission is hosting a virtual Speaker Series on Sunday, October 17th at 6:30pm centered on Hunterdon County’s history and archaeology. The guest presenters  will collectively share underrepresented and lesser-known stories of the past, from the lifeways of Native Americans and the vital role of African American communities in shaping the region, to an unexpected connection with the Carlisle Indian Industrial School. The presentations will be followed by a question and answer period. Free, but preregistration is required and access is limited to 100 people. More info at ASNJ.  (**Presentations will be available online after the meeting.)

That’s it for now. Best wishes to all,
Marfy