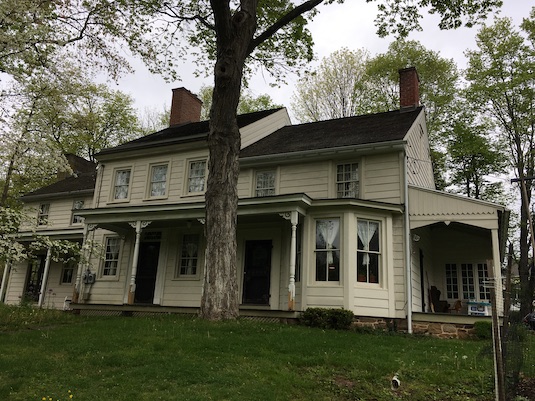 Goodspeed Histories This Week, May 9, 2020
————————————————————
I confess, it has been a struggle getting this week’s article finished. That’s because I was way too ambitious when I started out. I thought I could get from Sand Brook to Flemington in one article. But that was because I really didn’t know anything about the landowners in that huge space between Route 579 and Dayton Road. The more I learned, the more questions I had, and finally I realized I would have to break it up into three articles instead of one. Or, at least I think it will be three; perhaps it will be four.

Sand Brook to Raritan Township
Today I am publishing part six of the Route Not Taken—the path that the Delaware Flemington Railroad would have taken if it had been built. Starting at Sand Brook, I follow the line across Route 579 into Raritan Township to learn about the Swallow, Trout, Lequear, Thatcher and Higgins families.

It has been difficult for me to finish this article, because I had so much to learn about early Raritan Township families. And curiosity always takes me into side roads and records of adjacent property owners. And just when I thought I was finished and only had to polish it up, new questions popped up that required additional research. The goal of finishing seemed to recede in the distance. Silver lining: I’ve got a lot of material now for future articles.

Some History Thoughts
Richard Stockton in 1800
Princeton’s Richard Stockton showed up in a fascinating book about the election of 1800 called A Magnificent Catastrophe by Edward J. Larson (2007), which tells you something about what in incredible election year that was. It was too good to ignore, so I’ve added Stockton’s quote to my article “Aristocratical Stocktons (https://goodspeedhistories.com/aristocratical-stocktons/) ” as a postscript.

Doing Business on Christmas
I keep coming across deeds from the first half of the 19th century that are dated December 25th. I’m sure much work went into preliminary agreements before the big day, and wonder if some people liked the idea of signing the actual deed on a day when people attended church in the morning and then had a fine midday dinner. In the afternoon or early evening, I envision a purchaser arriving in his carriage and sharing a sip of something while the transaction was settled.

Some Losses
Peter O. Wacker died on March 24, 2020 in Bridgewater, age 83. I do not know if he was a victim of Covid-19, but whatever the cause, he is a loss to NJ historians. When I was getting my education in NJ history, his books were, and still are essential, particularly Land and People: A Cultural Geography of Preindustrial New Jersey, 1975, and Land Use in Early New Jersey, written with Paul Clemens in 1995. Also recently died is John Murrin, another important NJ historian who was killed by the virus. These are sad times.

500
I have lost count, but WordPress has been keeping track, and according to them, today’s post is the 500th. (Add the Swallow Family Tree, and I’ve got 501.) No wonder I lose track of what I’ve written. Many thanks to all of you for reading and commenting on these explorations of mine into the early owners of Hunterdon County’s farms.

Best wishes to all,
Marfy

Postscripts to Route Not Taken, part six (https://goodspeedhistories.com/route-not-taken-6/)
I neglected to included credit for research into the Trout family to two people: to Joseph R. Klett, editor of Genealogies of New Jersey Families, and to a Trout descendant, Craig Trout, who added a nice summary of the Trout family history to the entry for George Trout on Find-a-Grave (Memorial 51700597). That omission has since been has been rectified.

I also added information about the house that George and Hannah Trout actually lived in. I had presumed that they occupied the house on the Raritan Township side of the property, which originally extended across Route 579 to include acreage in Delaware Township. I wrote that since the Raritan house was no longer standing, we could not guess at its age. After reading that, Carla Cielo informed me that the house on the Raritan side had been taken down a few years ago by Adam Wengryn of Restoration Technologies (https://www.restotechnj.com/) , who estimated the date of construction at between 1800 and 1840.

Which means that it would not have been used by George and Hannah Trout. Carla thought the house on the Delaware Township side, which was a bank house, was more likely the house they used, a house later occupied by Amos Thatcher & wife. It does surprise me that the Trout-Thatcher house did not show up on the railroad survey map. And now it is gone also.

“Cold in Death” on the Sutton Farm
Scrolling through the Hartman abstracts of the Hunterdon Republican for January 8, 1880, I came upon this: “The body of Daniel R. Wolverton, a resident of Sand Brook, was found in the woods on the farm of Jonas Sutton, dec’d on Tuesday morning. He had been missing about a week and was found with a jug by his side . . . his intemperate habits may have contributed to his death.”

The Hunterdon County Democrat took a kinder view of the situation, and took more time over it, publishing this on January 13th: “Found Dead. Last Tuesday morning, 6th inst., as Mary Swarer was on her way to the house of her sister, near Sand Brook, she suddenly came upon the body of a man lying partly under some rails near a fence upon lands of William Shepherd. She retraced her steps to the house of William Sutton, and there apprised the occupants of what she had seen. In company with the Suttons, Mary returned to the spot when the startling discovery was made that the body was that of Daniel R. Wolverton, cold in death. After an inquiry into the cause of the man’s death the jury returned the following verdict: ‘After due deliberation we find that the deceased, Daniel R. Wolverton, came to his death from exposure between the 30th of December, 1879 and the 6th of January, 1880, as we verily believe.’ Deceased was a married man, between 35 and 40 years of age, and resided at Sand Brook.”

Daniel Rockafellar Wolverton (c.1832-1800) was the son of Job Wolverton and Catharine Rockafellar. He was a carpenter and commonly known as Daniel R. Wolverton. About 1860 he married Annie L. Goodfellow, born 1840 in Pennsylvania to John Goodfellow and Sarah Anne Fulton. Daniel and Annie and three children, Charles, Howard and Walter. Daniel never prospered. When he died in 1880, son Walter was only five years old. Widow Annie and Walter went to live in the household of Joseph Akers, who ran a billiard room in Lambertville. By 1890, Annie had moved on to Camden, NJ where she was living when she was awarded a pension as the widow of a veteran. Perhaps Daniel had fought in the Civil War, an experience that might have led him to drink excessively. I was unable to find mention of him in the Gazette or Republican as one of Hunterdon’s draftees, but more digging might turn something up.

In any case, not a very cheerful story. And, sadly, in the years after the Civil War, not all that uncommon.
Best wishes for a more pleasant weekend,
Marfy