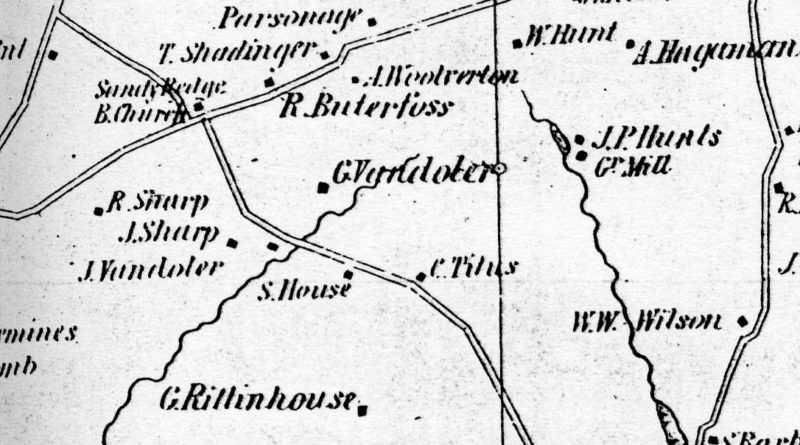 I’ve been working on Egbert T. Bush’s Sandy Ridge article, “Old Headstones and Headlines,” and thinking about how much things have changed since he wrote it nearly 90 years ago. So many houses have been built since then, so many roads widened and paved, so many cars travel them, so many farms have stopped being farmed. But also, so many people that Bush knew well are long long gone.

That’s what makes his articles a challenge, first of all to remember what life was like during the 19th century, and secondly to figure out who those people were that he wrote about. He could safely assume that his readers knew many of them. Not any more.

This article was published in the Hunterdon County Democrat a week after another one about Sandy Ridge. That article began with properties on Sandy Ridge Road close to Route 523. This article tackles properties further east on that road. It is as if Mr. Bush took a long walk on this road identifying all the properties along it. Families discussed in this week’s article are Brewer, Fauss, Holcombe, Hunt, Parkes, Rittenhouse, Sharp and others. The earlier article will get published here in a few weeks.

House Histories How To
This part of Bush’s article proved to be quite a challenge. I looked up many more deeds than usual trying to locate the places Bush wrote about. Sometimes land records can be very confusing.

My struggle to identify the history of the Sandy Ridge properties is timely in a way because I will be talking about how to do just that–research Hunterdon properties–at the annual meeting of the Lambertville Historical Society at the Pittore Justice Center (the old Acme) on Sunday January 20th at 1 p.m. The talk will be preceded by a short business meeting, but you don’t have to be a member of the LHS to attend. After the talk I will do my best to answer questions, so come along and pick up some tips, or just say hello.

An Anniversary
The beautiful Locktown Baptist Church is an amazing 200 years old this year. On January 1, 1819, the trustees met in Baptistown and “Agreed to build a new meetinghouse in the lower part of the Congregation.” At the meeting of April 10, 1819, “Daniel Rittenhouse gave a deed of conveyance for the meeting house ground and burying ground in the name of the trustees of the Kingwood Baptist Church.” Construction then commenced, and the first meeting in the new church took place a few months later.

The church is not only still standing, it is still in use, but now as a gathering place for the arts and other events scheduled by the trustees of the Friends of the Locktown Stone Church. Bless their hearts for keeping this exquisite building alive. If you are interested in joining them, feel free to contact the Friends at flscconcerts@gmail.com (mailto:flscconcerts@gmail.com) .

Looks like the big snow will stay south of us. Such an odd weather year.
Enjoy the weekend!
Marfy

Join us Sunday, March 14 at 2 p.m. for our annual spring meeting, which will be held via Zoom. Janice Armstrong will lead a virtual walking tour of downtown Flemington, featuring a number of rarely seen photos from our collection. Sign up for free via our website at hunterdonhistory.org/spring-meeting-virtual-historic-photo-tour-flemington/ ... See MoreSee Less

Our latest Collection Gem features an intriguing circa-1933 portrait of Dr. Samuel Budd English, the former Superintendent of the New Jersey Sanatorium for Tuberculosis Diseases in Glen Gardner. It's doubly interesting because it was painted by the "dean of Arizona artists" Lew E. Davis. hunterdonhistory.org/february-collection-gem-samuel-budd-english-portrait/ ... See MoreSee Less