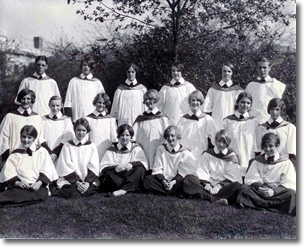 “What makes this collection truly fascinating, however, is a series of photographic images that capture many of the individuals that were involved with the school between 1895 and 1958.”

As many long time Hunterdon County residents know, the Flemington Children’s Choir School was founded in 1895 by Elizabeth Van Fleet Vosseller and Elizabeth Hopewell.  The primary purpose of the Choir School was to train the junior choirs of various Flemington churches, including the Baptist, Catholic, Episcopal, Methodist, and Presbyterian, and they provided much of the funding for the school.  The first graduation was held in 1907, and the school continued in operation until the last class graduated in 1958.

The Choir School was a vibrant and active participant in the Flemington community.  The yearly graduation often featured as many as 200 Choristers and 150 members of the “Chorus of the Alumni.”  Many other concerts were held by the school, both inside and outside of formal church services.  The school started caroling through the streets of Flemington on Christmas morning in 1909, and also participated in the town Tree Lighting Ceremony.

Although a Flemington institution, the Choir School’s impact was felt far beyond the town.  Elizabeth Van Fleet Vosseller, through her work with the Choir, became a nationally known and respected figure in the world of Choir Schools.  She was nationally recognized as an authority on the voice of young boys.  Her books and other publications that illustrated her teaching and organization plans for junior choirs were considered foundational for religious musical programs and featured many examples used with the Flemington Choir School.  She was often considered “the foster mother of all children’s choirs in America,” and the Choir School in Flemington enjoyed a brief national fame that was almost as bright as hers.

Due to declining enrollment and the influence of public school musical programs, the school closed in 1958.  In 1980, however, the operation of the Choir School reorganized.  A Board of Trustees, which had been long dormant, was revived and reorganized; the Choir School Building was donated to the County of Hunterdon and restored as a historical landmark; and the school began operating again as a center of cultural and musical appreciation.

Throughout the decade of the 1980’s, and into the 1990’s, the revived operation, mainly through the interest and efforts of concerned living alumni, provided a series of musical events and sponsored scholarships for local students.  As the millennium turned, however, public interest in the school’s operations waned again.  In 2010 the Trustees dissolved and released the bulk of their remaining records to the Hunterdon County Historical Society.

The result of that donation is a mixture of records from both the older, original Flemington Children’s Choir School (1895-1958) and the newer, revived version (1980-2000) that functioned as an extension of the original “Chorus of the Alumni.”  It contains a series of administrative and a series of operational records from both versions of the school.  There is a series of various items of historic interest from the original version of the school and a small series (two folders) of multimedia performances of the original choir.

What makes this collection truly fascinating, however, is a series of photographic images that capture many of the individuals that were involved with the school between 1895 and 1958.  The bulk of the group includes graduation photographs, group posed portraits and individual portraits.  An index is provided for almost 500 named individuals that appear in images in this collection.  It is my sincere hope that our membership and other researchers will appreciate this collection for both its historical documentation of an important Flemington institution and for the genealogical value of some of the records and the photographs, in particular.