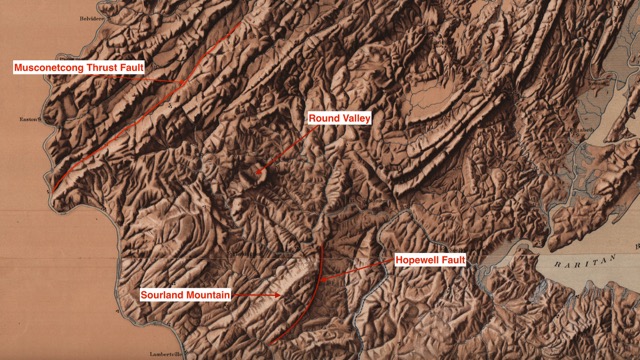 Multiple copies of Map 19 are contained in the HCHS Map Collection. It is an 1896 “Relief Map of New Jersey” (Figure 1, scanned image courtesy of DavidRumsey.com) illustrating how the geology of the State controls its topography. (You might want to compare this figure with Figure 1 from the Collection Gems July 2017 article). Many of the features are familiar to anyone who has driven the State, whether you crossed the Watchung Mountains on your way to New York City, Sourland Mountain on your way to Hopewell, or the Highlands driving along State Route 31 north of Clinton to get to High Point State Park. But there are other features not easily recognized from your car, but readily discerned on the relief map. Figure 2 is the uninterpreted background for Figures 3, 4, and 5. (CLICK on images for larger view)

The remnants of the Pleistocene Ice Age are visible on Figures 3 and 4, which clearly illustrate the locations of the great meltwater lakes that formed when the ice sheet melted perhaps 20,000 to 11,000 years ago. “Glacial Lake Passaic” can be seen on the map dammed behind the Watchung Basalts, surviving as flat wetlands readily visible on the relief map. The remnants are preserved as the Great Swamp, Great Piece Meadows and Pompton Plains (labeled GS, GPM and PP on the Figure). The (much maligned) Hackensack Meadowlands also are the remains of bodies of water filled by glacial meltwater: Glacial Lakes Bayonne (GLB) and Hackensack (GLH), when meltwater was dammed behind the terminal moraine (see below) and the 200 million year old Palisades Sill.

The terminal moraine – the debris pile marking the furthest advance of the last ice sheet some 25,000 years ago – can be observed in Figure 4 as a roughly east-west ridge, trending southeast through the Watchung Mountains and onto Staten Island. (While much more obvious the further east you go, there are vestiges present in the western part of the State, although the most recent ice sheet is not believed to have reached Hunterdon County. The approximate trend is represented on Figure 4 by the dashed line). The moraine continues into New York on the right-hand side of the image. The Brooklynites among you will recognize the name Bay Ridge, in southwest Brooklyn, on top of the moraine. It was along this ridge that General Washington formed the Continental Army’s defenses in an unsuccessful attempt to defend New York against the British invasion in 1776. This high ground was the focus of the British attack during the Battle of Brooklyn/Long Island, fought August 27, 1776, a crushing defeat that eventually led to the Continental Army’s retreat across New Jersey.

There are many Hunterdon County geological features visible on the relief map. Among the more obvious in Figure 5 are: Sourland Mountain; the Hopewell and Musconetcong Faults; Round Valley.

Several copies of the map in the Collection are accompanied by a set of three “name sheets”. Being fairly this (onion skin-like) sheets, I hesitate to scan them for fear of damaging them. However, they – and Maps 19 and 35 (the 1839 geological map of the State) – will be on display during the “Afternoon At The Archives” event on October 7. I hope to see you there!