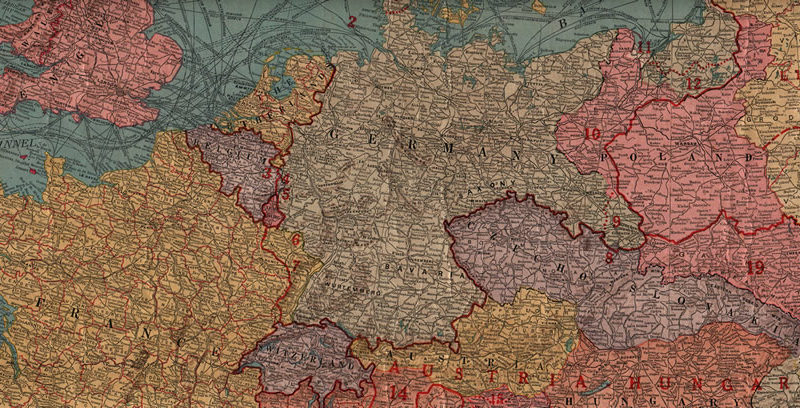 Many authors conclude that terms of the Treaty of Versailles were a significant contributing factor to the origin of the Second World War. The Treaty, signed June 28, 1919, officially ended the Great War. The fighting ended when the Peace Truce was proposed, and agreed 99 years ago this month. But the Treaty of Versailles established reparations punishing the defeated countries both financially (Germany would pay almost $382 BILLION) and territorially. Map 79 in the Society’s Map Collection is a dramatic illustration of the territorial punishment meted out against the “Central Powers” (Germany, Austria-Hungary, and the Ottoman Empire) and Russia, then in the throws of its civil war pitting the Red (Bolshevik) and White (Nationalist) Armies.

The map itself is too large to be fully scanned by the equipment available, but the figures sufficiently convey the “punishment” meted out to the losing countries. Figure 1 provides a good summary of the territories essentially lost by the Central Powers. In it one senses the seeds of World War II being sown. Germany was forced to make enormous reparation monetary payments, but also lost (or stood to lose) 13 territories. (For information, a “plebiscite” is a direct vote of the electorate concerning a change of government. Thus, the three areas in which plebiscites were to be held could have voted to separate from Germany. We can only imagine the uncertainty and resulting tension in these areas leading up to the vote). Many other areas were ceded to victorious countries, disputed, or would have their fate decided by the victors or the League of Nations.

If the text of Figure 1 is insufficient to convey what an enormous territorial price was paid by those countries on the losing side (or were the site of revolution), Figures 2 through 5 provide graphic evidence. Inspecting Figure 2, areas labeled 3 through 7 were clearly intended to provide a “buffer” between Germany and the countries of Belgium and France. Areas 9 through 12 buffered Czechoslovakia and Poland from Germany. Importantly, these countries became the sites of the first actions of the Second World War in 1938 and 1939, respectively.

Figure 3 illustrates the Balkanization of the area that became Yugoslavia after World War II, substantially reducing what was pre-War Austria-Hungary. Viewing the territory lost by Hungary to Roumania [sic], is it any wonder Hungary joined the Axis Powers of World War II in 1940? Figure 4 shows the West’s attempt to reduce the area claimed by Soviet Russia, granting independence to 9 new countries… most of which would be incorporated in the Soviet Union after the Russian Civil War, and ALL of which would fall to the U.S.S.R. before 1941. Again, given this territorial “punishment”, it’s unsurprising that the Soviet Union signed the Non-Aggression Pact with Nazi Germany in 1939.

One question remains: why were Bulgaria – a member of the Central Powers – and the Ottoman Empire not punished as severely as Germany and Austria-Hungary? The map deals primarily with Europe, so much of the Ottoman Empire’s “punishment” is not shown. The British had concluded a peace treaty with the Ottoman Empire in October 1918, and much of the Empire’s territorial losses were in the Middle East, south of the mapped area, including Transjordan, Mesopotamia, Palestine, and the Sultanate of Nejd (today’s Saudi Arabia). Hungary’s “punishment” awaited the conclusion of the Treaty of Trianon in 1920, in which it lost about 2/3 of its territory and inhabitants.

Tragically, a glance at the changes to the European map made in 1919 can readily explain some of the cause of the European Second World War- a mere 20 years later.