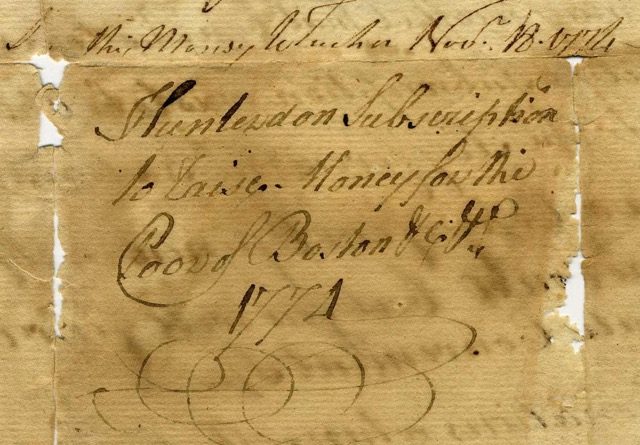 This month highlights an August 1774 letter (Figure 1) to the Freeholders of Alexandria Township contained in the Emley-Race Papers, Collection 26, Box 4, Folder 191 of the Society’s Archives. (Thanks are due to Robert Leith for the scan and some improvement suggestions for this Gem write-up).

The letter discusses the proceedings of a significant Colonial New Jersey meeting prior to the American Revolution. As stated in a pamphlet entitled “Prelude to Revolution: the New Brunswick Meeting of July 21, 1774” authored by Dr. John A. Lascher for the Nation’s Bicentennial, CLICK HERE FOR PAMPHLET, New Jersey sent 72 delegates to discuss the Colony’s grievances against Great Britain’s government. (An interesting aside is that this meeting followed one at John Ringo’s tavern in Amwell Township 8 July, which – among other things – suggested New Brunswick may be inconvenient to the “lower counties” and proposed an alternate Colony-wide meeting for 11 August in Princeton). Despite this, the 3-day meeting convened in New Brunswick 21 July, with Hunterdon County representatives Samuel Tucker, John Mehelm, John Hart, Isaac Smith, Charles Coxe, Joachim Griggs, Benjamin Brearly, Abraham Hunt, and John Emley (whose correspondence is in Collection 26) attending. At the New Brunswick meeting New Jersey agreed to support their sister colonies in the coming resistance to the British, a “Committee of Correspondence and Inquiry” was appointed, with Hunterdon County’s Tucker, Hunt and Smith as members, and proposed raising GBP300 to defray the expenses of five New Jersey delegates to “the General Congress to be held at Philadelphia”, an event held from 5 September to 26 October, 1774. Another resolution suggested raising money “for the Sufferers in Boston” (Figure 2), civilians subjected to the hardships stemming from the Closure of their Port under what was known as the “Intolerable Acts”. The meeting proceedings are on page 25; just CLICK HERE.

Despite the Township freeholders feeling the sum allocated to Alexandria was “Disagreeable”, it was paid in full by John Emley and John Sherrid (Sherred?) (Figure 3). Further, by November 18, 1774 the County had raised funds for the “Poor of Boston” (Figure 4), consistent with the New Brunswick meeting’s sixth resolution and – as seen in Figure 2 – the earlier meeting at Ringo’s Tavern on the 8th.

Clearly expressed in the proceedings of the subject meeting was the sentiment that Jerseyans “are, and ever have been, firm and unshaken in their loyalty to His Majesty King George the Third… and that they detest all thoughts of an independence of [sic] the Crown”. These echo the results of the meeting in Ringo’s Tavern which stated “We do most expressly declare, recognize, and acknowledge His Majesty King George the Third… always to bear faithful and true allegiance to His Majesty”. Both statements clearly demonstrate the loyalty to the King, but reveal resistance to the Parliament in the second “sentiment” of the New Brunswick meeting proceedings. Once this viewpoint was changed by events, the Colony became a State and, ultimately, the “Cockpit of the Revolution”. And Trenton resident Abraham Hunt – previously mentioned- hosted Hessian Colonel Johann Rall for a late Christmas Night dinner (and “adult beverages”) when General Washington’s Continental Army crossed the Delaware River for the surprise attack on the Trenton garrison, beginning the “Ten Crucial Days” of the Revolution!