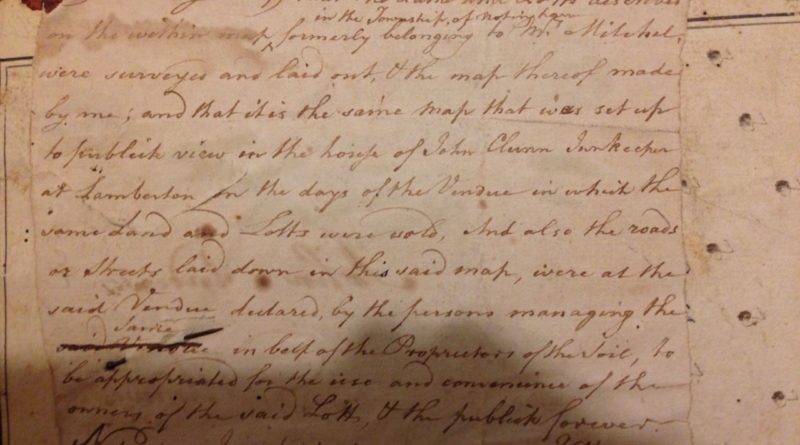 Recently I inspected Map #291, a 1794 map of “Lambreton-Nottigham Township NJ” [sic]. It is a fascinating map, hand colored and backed with fabric, and in very good shape (Photo 1). It’s accompanied by a hand-written note stating the map resulted from a survey by John Hall (Photo 2). I noted the street names on the map: Water, Front, Second and Third Streets running almost perpendicular to Federal, Washington, and Landing Streets. The latter three streets trend almost perpendicular to a stream or river which flows generally NNW-SSE. A Hagstrom map of (current) Mercer County suggests this is South Trenton, with the exception that Washington Street has been renamed Cass Street and some streets have been replaced by construction along the Delaware River. Adding further credence, there is a Lamberton Street in the area, south along what is now Coates Street (once Water Street?).

A digitized copy of the book “New Jersey Archives: Documents Relating To The Revolutionary War” is available online, containing reprinted advertisements from the late 18th Century. Among them, on page 406, is one dated March 26, 1782, referring to a plat of “convenient lots” on public view at several places, among them being “Capt. John Clunn’s in Lamberton” (photo 3). The hand-written note in photo 2 identifies the subject map as the one displayed “to publick view at the house of John Clunn Innkeeper”. Lots were characterized as “50 to 60 feet front by 300 feet deep”, consistent with the mapped lots. The note also refers to the area being “appropriated for the use and convenience of the owners”, suggesting the land was once owned by a Loyalist and was appropriated by the officials of the new State of New Jersey. If this is the case the map dates to 1782, the note being appended in 1794.

The island separating the lots from the Delaware River is now the home of Waterfront Park and the stadium in which the Trenton Thunder play baseball. So next time you attend a Thunder game think of the “lotts” that once fronted the Delaware and try to imagine what the area was like 230 years ago. And spare a moment to consider what the Loyalist owner would have felt when the land was appropriated and sold off to “rebels”.