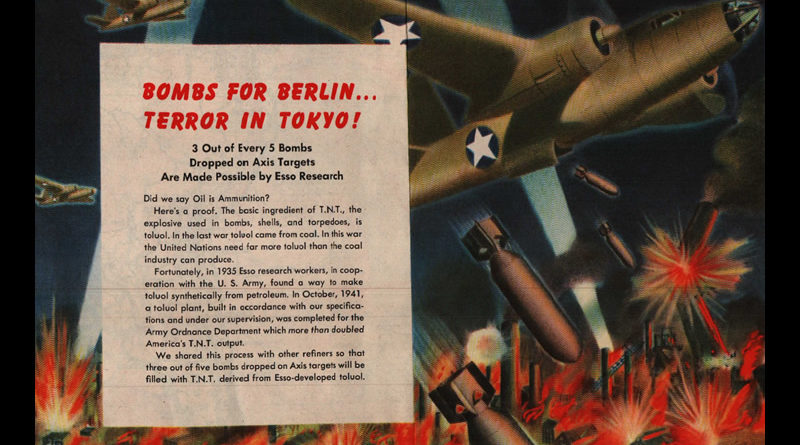 Last month’s Collection Gem illustrated the territorial changes that arguably contributed to the start of the Second World War. This month’s map provided Americans information on the important contribution of petroleum producers (in this case Esso) to the War Effort during the latter War. Figure 1 is the title block for the subject map.

Map 238 was produced by Esso in 1944 after more than two years of United States involvement in the War, one into which the US was drawn by the Japanese attack on the American Pacific Fleet 76 years ago this month. The map was a means for people on the Home Front to follow the sinews of war, the supply lines employed by the Allies against Nazi Germany and Imperial Japan.

Figures 2, sponsored by Esso Marketers, tells of the “vital importance” of transportation and the role of oil in the battle for victory. It also discusses the leaps forward made by Esso to produce synthetic rubber from oil products and hints at the role of Government in Wartime production prioritization. Have a close read of “Rubber From Oil” and consider how modern Free Enterprise might react to the Government assuming control of a large, Company built, plant.

Figure 3, sponsored by Esso Research, briefly describes Esso’s contribution to the creation of synthetic toluol, a key ingredient in TNT. This brief advertisement is a “child of its time”, when it demonstrates the importance of oil in the production of synthetic toluol and how oil displaced coal in importance by 1944. It also demonstrates the degree to which cooperation replaced competition during the War. “We shared this process…” are words that one is less likely to see in print during Peacetime!

Highlighted in Figures 4 and 5 are the key transportation hubs (Alexandria, London, Moscow, Darwin, Chungking, Honolulu and Dutch Harbor) and targets (Tokyo and Berlin). Notice Rome is not included as a target on the European map in Figure 4. It reflects the fact that Mussolini’s Fascist Italy surrendered to the Allies on 8 September 1943.

Noteworthy is the fact that the map illustrated the European National Boundaries as they existed before the Axis onslaught, so pre-War countries are shown (e.g.: The Netherlands, Belgium). Take some time to scan the world’s countries. Recognize many reflect the Age of Empire: French Indochina, Netherlands Indies, French West and Equatorial Africa, Belgian Congo, and many countries shown as “(U.K.)” governed (Nigeria, Gold Coast, Aden), a world that ended during the many independence movements of the following 20 years.

While you’re looking at geographic place names, notice “Volcano Is.” almost due south of Tokyo. It later became famous (infamous?) as Iwo Jima! Notice, too, that the Marianas (including Saipan) and Marshall Islands were still held by the Japanese when the map was issued.

It is interesting that Japan owned the entire Kurile Island chain and the southern half of Sakhalin Island; territory conquered and annexed by the USSR in August 1945, just before the end of the Pacific War. This is a reminder that Soviet Russia did not declared war on Japan until August 8, 1945, two days after the first atomic bomb was dropped on Hiroshima. The day after the USSR declared war on Japan Nagasaki was the site of the second atomic bombing, resulting in Imperial Japan surrendering August 15. Despite the role these bombings seem to have had on Soviet entry, the timing was actually agreed between the Allies at the Yalta Conference in February 1945 when Stalin agreed to enter the Pacific War within 3 months of the end of the European War. (He managed to do this… with an hour to spare!)

Starting next month Collection Gems will expand beyond the Historical Society’s Map Collection and feature items from our other Collections as well.