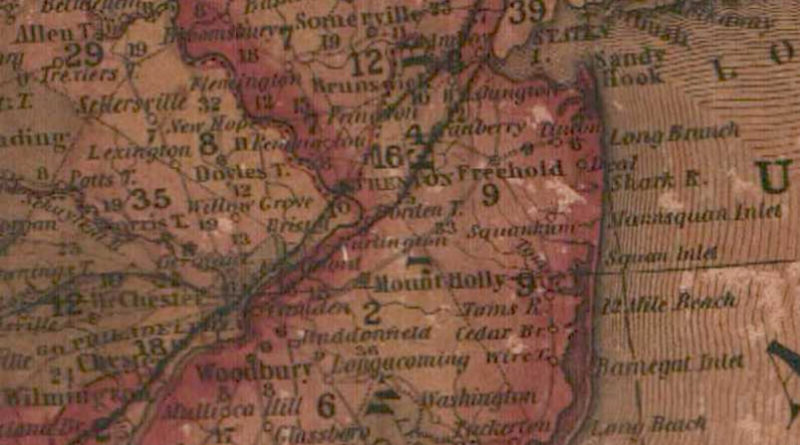 Examine the United States of 1840 on Map 10 (whose title block is shown in Figure 1) of the Hunterdon County Historical Society’s Map Collection. (First, I will tell you that the images for this article are edited to be a little lighter and more legible in the figures. The animal glue used to mount the map on linen darkens as it ages).

Think about 1840 for a minute. What did an American’s world look like? President Martin Van Buren was nearing the end of his first (and only) term as eighth President of the United States. The country consisted of only 25 states (Figure 2). New York City was confined to the southern tip of Manhattan Island (Figure 3) but had the largest population of any American city (three times that of second place Baltimore), with just over 312,000 people. Its growth was due largely to its increasing function as a port, significantly owing to its strategic position near the Erie Canal. The Canal, known facetiously as “Clinton’s Ditch”, started a boom in canal construction, so much so that the map includes a chart of comparative canal lengths (Figure 4). At 363 miles the Erie Canal was the longest in the country. Texas is labeled as “Austin’s Colony” (Figure 5), having won its independence from Mexico four years earlier. Statehood was still five years away, though. Alaska was still Russian property until “Seward’s Folly” in 1867.

Closer to home, the map shows Hunterdon County as the 3rd most populous county in New Jersey at 31,060 people (Figure 6), but you might wonder why Mercer County is not included in the chart, since it was created in 1838. The map figures are based on the 1830 census, before Mercer County was formed, so no number was available for Mercer. But by virtue of its role as Hunterdon County Seat, Flemington appears on the map (Figure 7).

A couple more notable technological accomplishments include:
1 — the world’s first commercial portrait photography studio opened in New York City.
2 — the world’s longest railroad, the Wilmington and Raleigh, is completed. The road is 161.5 miles solely within North Carolina. Twenty years later, the line became one of the Confederacy’s most important supply lines for Lee’s Army of Northern Virginia.
Given these two “notable accomplishments”, it’s amazing to think we have cameras in our phones, and can fly (when conditions permit) anywhere in the world!