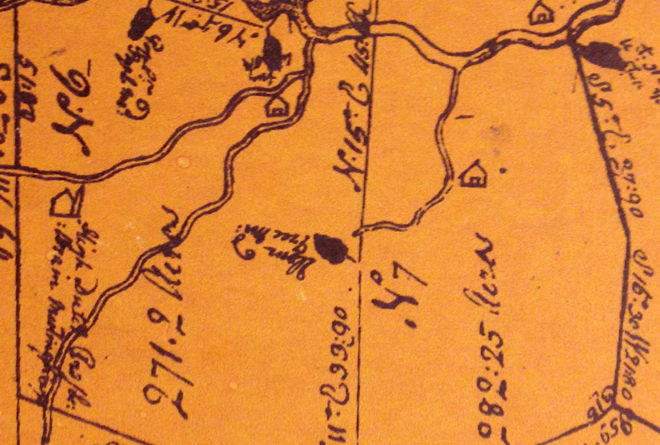 Over the years, Joe Hauck, Lebanon Borough’s historian, has ferreted out some of the area’s interesting pre-revolutionary war tidbits regarding early rural Hunterdon. One such episode is the story of Map 300 (Photo 1). Found tacked to the wall of Helen Young’s garage about 35 years ago, it’s a copy of the 1765 original printed on orange paper, and contains a familiar location – Potters Town. The map in the Historical Society’s Map Collection had no provenance, listed only as ”farms”. Joe and and County Historian Stephanie Stevens worked to give the little map some history. Joe remembered the original discovery of many years ago, Stephanie recalled having copies made and donated to the Society – again many years ago. With care, magnifying glasses, and good eyes, forgotten secrets were uncovered.

Surveyed by Benjamin Morgan and ”laid down by a schale (sic) of twenty chains to the inch” it is dated February ye 6 1765. Division of the area depicts seven different lots, each with access to a stream including the South Branch Rockaway River. Each of these numbered lots is also contained on the Stanton-Hammond maps of 1964. While there are houses drawn on several lots, one clearly depicts a church (left in photo 2). Potterstown, on the boundary of the map, indicates several structures. Standard colonial boundaries markers were used – black oaks, large chestnuts, etc. – and bore a chiseled mark of letters indicative of lot boundaries. Names of tenants/eventual owners are attributed to each lot:

Study tells us that these lots are on the edge of Round Valley and encompass a large portion of Lebanon village along with portions of modern Clinton Township. They border on Readington Township which was created in 1730. As for the church, it was the first German Reformed Church in the area and was known as “the Potters Town Church”. It stood on “the High St.”, now Cherry Street. While the church has moved to Brunswick Ave. in Lebanon Borough, the ancient cemetery remains, a gift to the congregation by Walter Rutherfurd in 1769.

History tells us that this map is a portion of the 10,000 acres purchased by James Alexander in 1744 from the proprietors of the West New Jersey Society’s “Great Tract” – containing almost 100,000 acres – surveyed in 1711 and running all the way from the Delaware River up to the falls of the Lamington River. Alexander, a very wealthy man, purchased 10,000 acres, inclusive of all of Round Valley. Alexandria Township was named for him. Since this was an investment, land was subdivided and sold off, first occupied by tenants, then purchased.

The meaning of the map’s history was lost but now it’s found !