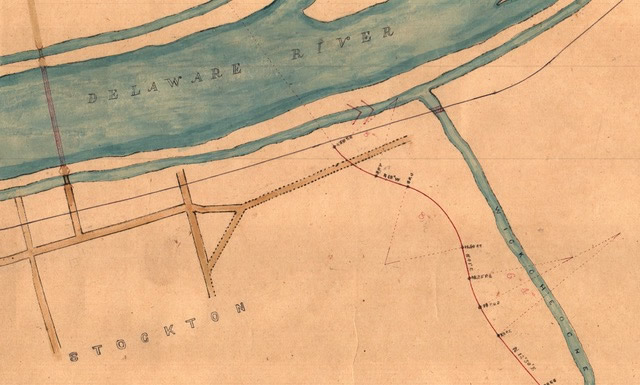 A proposed railroad line from Flemington to Stockton that was never built is the subject of this month’s Collection Gem. A draft map of the proposed route at a scale of 1” = 400’ for the “Delaware & Flemington Rail Road” is captured on Map 186 (Figure 1). While this map has no date, and there is no entry for such a railway line on the internet, my suspicion is that it predates the 1894/5 map highlighted in last month’s Collection Gem, perhaps even the 1871 map highlighted in the July Collection Gem. Why? My conclusion is based on the fact that there is a line running across the southern part of Hunterdon County , ending in Lambertville. While I lamented the “over-building” of rails last month, I find it difficult to believe a line would be proposed tracing very much the same route, but terminating at the Delaware River at Stockton when a line terminating at Lambertville, a city with almost eight times the population of Stockton (based on 1900 Census figures of 4,637 in Lambertville and 590 in Stockton), already existed. But the greater clue is the inclusion of the Easton and Amboy line which was completed by 1875 by the Lehigh Valley Railroad. It combined the Perth Amboy and Bound Brook Railroad and Bound Brook and Easton Railroad, and ran across Western New Jersey from Phillipsburg to Bound Brook. So we have a date bracket for map 186, no older than 1875.

Figure 2 is an interesting bit of 19th Century “salesmanship”. The dashed line on the left side of the figure represents a change in scale to 1 inch = 2 miles and shows the existing lines that would connect to the proposed one (Figure 3) . I think this was a pretty elegant solution in an attempt to illustrate the importance of a line to the Delaware. Interestingly, the line with which the proposed line would presumably compete, the Flemington to Lambertville, was not shown on this map.

The map indicates all crossing points of the red colored surveyed route: roads (brown) and creeks (blue) would require additional expenditure for gates (if used at level crossings) and bridges (at creek crossings). The route itself is complete with magnetic bearings of the course, and surveyed elevations (above the Delaware River?) at several points along the way. These elevations were clearly important to the intended audience in showing the railroad’s grade. Online historical topographic maps indicate the route of the Flemington to Lambertville crossed numerous roads and the Alexauken Creek. The road ran down the length of that creek, but it was money already spent. The proposed route posed a number of challenges in this regard, with multiple crossings of the Wickecheoke Creek being one (Figure 4). I assume there was the additional issue of what to do with the rolling stock when the end of the line was reached north of Stockton. If the railroad was for passengers, few issues. But if it was intended for freight, a bridge or ferry line would have to be built across the Delaware River (the dotted red line in Figure 5). And was there a line to carry stock away from (or into) Center Bridge, PA across the River? All things being considered, the project was likely deemed too “capital intensive” for investors. So the whole surveying exercise was for naught and the line was never built. But it’s interesting to think of what would have become along the proposed route given success. Would the line have been converted in the first “rails to trails” initiative? What about the traffic flow along State Highway 29?

Next month I’ll get away from the New Jersey railroads and discuss the industry’s importance to the Union effort in the American Civil War.