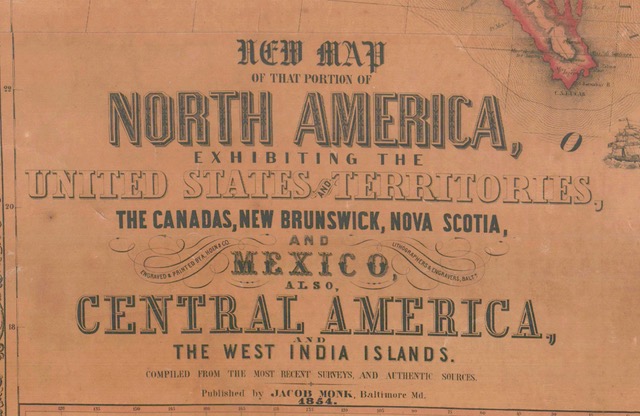 Writing these map descriptions can be very educational; I’ll see something on the map of which I am unaware, and do a little research. Maps 17 and 86 represent the United States (and much of North and Central America) in 1854 (title block in Figure 1). Published by Jacob Monk of Baltimore, the map depicts the developing California gold fields in yellow (Figure 2). This edge of the map suffered some minor water damage on the map (blurred dark vertical line). Despite being “compiled from the most recent surveys and authentic sources”, there are some curious mistakes. Perhaps the “surveys” and “sources” focused on the gold fields, resulting in the absence of Lake Tahoe on the California-Nevada border!

Moving east, Figure 3 shows the Nebraska and “Kanzas” Territories, created in May of 1854 by the “Kansas-Nebraska Act”. This area was hotly fought over and – due to the concept of “popular sovereignty” relating to the expansion of slavery – the results led to the American Civil War. Noted are the “Hunting Grounds” of several tribes. The names of many tribes are shown on this part of the map, indicating a significant – but unorganized – Native American presence. Also recorded, immediately above the word “Territory”, is the fact that “The Army of the West left Ft. Leavenworth June 30, 1846 Commander Brigadier General Kearney & Reached Santa Fe Aug. 18th”. This army of some 1,600 men (under Jerseyan Kearney) traveling with an additional 900 men, captured New Mexico during the War with Mexico. (An interesting sidelight is the fact that New Mexico was a Territory and – due to many conflicts and troubles – did not gain statehood and self-governance until 1912). The Army of The West ultimately ended the War in California, expanding the United States “from sea to shining sea”. Kearny eventually was named military governor of California. His son, Phillip, Jr., was killed at the Battle of Chantilly during the American Civil War.

The future state of Oklahoma (Figure 4) held three tribal territorial names are listed: Chah-Lah-Kee, Muscogee, and Chah-Ta: Cherokee, Seminole, and Chickasaw, respectively. Native Americans clearly dominated the area in the 1850’s, prior to the construction of the railroads and settlement by United States citizens.

And in Texas is found “Part of Fannin Land District”. I attempted to learn about this District but most of my search “hits” suggest much of Fannin County is still for sale! Also shown is “Fisher & Miller’s Colony”, an attempt to recruit settlers from Germany. It appears to have been a “tough sell” since most Germans were farmers, central Texas being in Comanche territory and less conducive to farming.

Figure 5 takes us further east to illustrate antebellum Virginia. Obvious is the geographic separation of western from Tidewater Virginia by the Blue Ridge Mountains. Not apparent on a map is the difference in residents’ philosophy, leading to eventual separation and creation of West Virginia in 1863.

Finally, the map includes some anachronistic touches. While the map includes finished and unfinished railroads, stage roads, canals, and stopping places along the Oregon Trail, Figure 6 illustrates the shipping technology of 1854, dominated by ships of sail, sometimes augmented by steam power. Figure 7 illustrates quite dramatically the distance difference a prospector should expect to travel to San Francisco, gateway to the gold fields of California. From New York or Philadelphia across the Panama Peninsula one travel 5,600 miles, some 11,400 miles fewer than traveling around Cape Horn! No, thank you. I’ll stay home and enjoy traveling through the maps…

There is much about this map to commend it to further study. I made no comment on British Canada or the countries of Central America, all of which are worthy of your study, but there has to be a limit on the length of these articles!