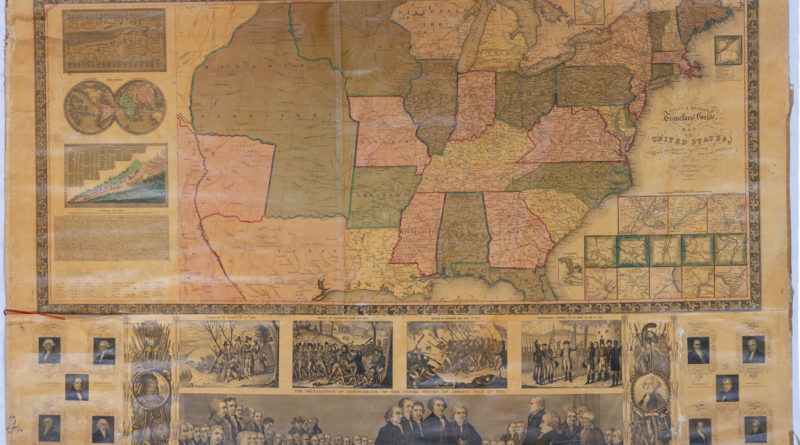 The “Traveller’s Guide and Map of the United States” is Map 73 in the Society’s Map Collection and dates to 1844. It’s a fascinating bit of history since it contains “the roads, distances, steam boat and canal routes, &c.” (Figure 1; photographed by Black Lab Studio & Imaging, 24 Main Street in Flemington, courtesy of Bob Leith). It also contains numerous area maps of major population centers. For information sake, the country comprised a total 26 States at the time of the map, Michigan being added as the 26th in 1837. Another state would not be added for another 8 years.

Several interesting features are apparent in Figure 2. The newest state of Michigan – particularly its western coast – is misshapen. New Jersey isn’t perfect either, but this is the price you pay for not having satellite images when you make a map! (but look closely; Flemington is included on the map!) Virginia is huge, but included what is now the State of West Virginia until the latter achieved Statehood in 1863 during the American Civil War. But to really get a sense of how different the United States of America was from today you should look at Figure 3 & 4, taking note of the fact that much of what is now US territory (see my October 2018 Collection Gem) was part of Mexico and the Republic of Texas, a sovereign country existing from March 2, 1836, to February 19, 1846. The Republic of Texas looked very different than the familiar shape seen as the State today. In 1844 the Red River formed the border of Texas with Missouri Territory and Mexico, while today Texas touches neither Missouri nor does the Red River touch Mexico, although the River still forms Texas’ northern border with Oklahoma. Also notice that Florida is included only as an inset, since it wasn’t part of the United States either, and wouldn’t be for another year. And – much like Florida’s exclusion from this map – there was no need to include the southern tip of Texas to the Rio Grande, since it was not a State until 1845.

Notice the abundance of Native American tribes, too. This illustrates how native peoples were displaced as the United States expanded westward. See, for example, the upper right-hand side of Figure 3, where the Delaware tribe is shown to be in the southwest corner of Missouri. Pawnees, Cherokees, Choctaws and Comanches fill the Territories. (But who were the New York Indians in the Wisconsin Territory near Green Bay?) The established States are populated with towns and cities but there are few tribes shown. Viewed with 21st century eyes, it seems sad.
Canada was a very different place as well. First, it was still a British Possession in 1844, and would not gain complete independence until the passage of the Canada Act in 1982, although Canada saw near complete legislative autonomy from Parliament much earlier, in 1931. The modern Province of Ontario was still labeled as “Upper Canada” (with Toronto being shown as an alternate name for York), to distinguish it from “Lower Canada” (the Province of Quebec), both visible in Figure 2. I haven’t rigorously reviewed the distances provided by the map, but I suspect they are somewhat different than you might measure today.

An amazing amount of global information is included in the map, too. As an example, see Figure 5. It includes a graphic representation of river lengths (labeled “The Chief Rivers”), and the heights of the “Principal Mountains” of the world. And, not to be outdone, a United States map of a country less than 70 years old would obviously include a drawing of the Second Continental Congress in session, the Signer’s signatures, and a full printing of their Declaration of Independence. Mind you, each of these is a challenge to the eyes, but it’s all there!