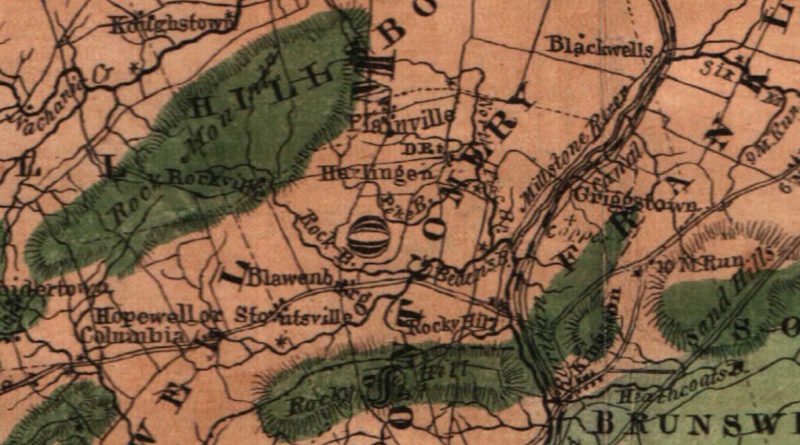 The Hunterdon County Historical Society Map Collection contains Map 35, an original 1839 Geological Map of New Jersey (a composite scan in Figure 1) demonstrating that the State’s distinct rock units were described and mapped over 175 years ago. This is surprising since Princeton University’s map website “Nova Caesarea: A Cartographic Record of the Garden State, 1666-1888” says “A geological survey of New Jersey had begun in 1836–1840 under the direction of Henry D. Rogers, New Jersey’s first state geologist.” The first New Jersey State Geologist was a Professor of Geology at the University of Pennsylvania! The effort was stopped after 1840, so it comes as no surprise that funding was – as it is now – an “on-and- off” affair. It wasn’t until 1860 when the New Jersey Agricultural Society urged funding a State map that an “official” Geological Map was published in 1868 as part of the Survey’s final report. However, the Collection map resulted from Rogers’ earlier work, predating the 1868 map by nearly 30 years.

You’ve probably noticed the resemblance of the State to profile of a west-facing person. The outline of the facial features and chest result, in part, from “differential erosion”. The northern reaches of the Delaware River trend subparallel to the Valley and Ridge Province rocks in the extreme Northwest corner of the state (Sussex and Warren Counties). Further south, in Alexandria Township, the River’s western excursions coincide with more erosion–resistant rocks of Musconetcong Mountain in the New Jersey Highlands Province, which contains the oldest rocks in the State, almost 1-1/2 billion years old. Below Trenton, the presence of harder rocks of the Coastal Plain Province (the green and light blue units covering most of the state south of a line from Trenton to Raritan Bay) also results in a westward trend in the River. Eastern excursions in the River’s course coincide with the more easily eroded rocks of the Newark Basin (Piedmont Province; yellow and dark green rocks running northeast from southern Hunterdon County to the New York State Line) and inner Coastal Plain (northern Mercer County). The “ear” is the result of the three Watchung volcanic flows in Somerset and Union Counties.

And Sourland Mountain (called Rock Mountain in the close-up shown in Figure 2) is mapped as “trap rock”, the same rock type outcropping – and quarried for road aggregate, landscaping, and other uses – along Route 29 near Lambertville, and at Rocky Hill in Somerset County. This apparently is the same rock unit as the

Palisades Sill. Looking at Figure 3 – a screenshot of the modern geological maps of New Jersey and New York – the Sourland Mountain “trap rock” (red) is separated by a break in the earth’s crust (a fault, the thin black line) from Rocky Hill, which dips eastward and is buried beneath Coastal Plain sediments (yellow). The unit then trends northeastward and outcrops along the Hudson River as the Palisades Sill.

Comparing the 1839 and 1868 maps one sees some differences. While the rock distributions are pretty much the same, the later map identifies the Era (with some age implication) of the rock units, indicating the progress the science had made. The former identified rock types without assigning any relative age (Figure 4). It appears to use a pre-existing map (perhaps an update of the 1828 map shared in Collection Gem of March and April, 2017?) showing church, mill/manufactory, and tavern sites… and the addition of several railroad lines including the 1832 Camden and Amboy Railroad, indicating the technological progress made in a very short time!

What a geologically fascinating state we live in! While people rarely associate a varied geological framework with the State of New Jersey, it’s comprised of rocks from four different geological provinces, as well as preserving remnants of the last Ice Age. Next time you take a drive in our varied State, look at the scenery and notice the geology that controls it!