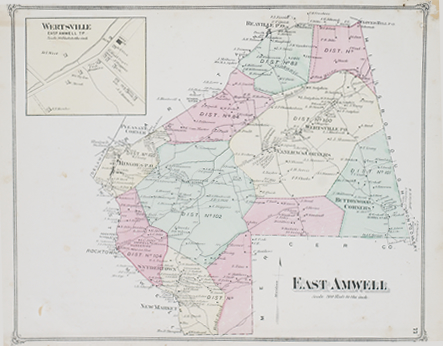 Happy New Year! And may 2017 be a happy, healthy, and prosperous year for each of you. (And if you haven’t renewed your Membership – or become a new Member – there’s no time like the present to do so! A New Year’s resolution, perhaps?)

Our house dates back to the late 1970s, but our home’s “youth” has not diminished my interest in researching older properties, which I’m doing for some friends in East Amwell Township. These efforts have taught me the value of using multiple vintage maps. I share these learning points in this article.

First, I gained some insight into “pre-GIS” and “pre-satellite positioning” mapping issues, and recognized that even the best survey could be compromised by a drafting error. Maps are available in the Society’s collection for Hunterdon County from 1851, 1852 (Cornell’s First and Second editions; Maps 45 & 53, respectively) and 1860 (Lake & Beers; Map 18). Each map identifies the property owner for each house at the municipality level. Lastly, the Pugh & Downing county map of 1902 (Map 105) provides 50 years of ownership. The 1873 Beers map for individual municipalities is also available in pdf form on the Hunterdon County Public Library website. Close-up comparison of the (modern day) Van Liew’s – Old York Road intersection on these maps indicated one vintage was incorrectly represented.

Key to understanding which map is correct was noting the location of the road intersection relative to the Raritan Township portion of the Pleasant Ridge Cemetery (which was unlikely to move much…). A Google Earth image (figure 5) reveals the present day relationship of the Cemetery with the Van Liew’s / Old York intersection. The cemetery is southwest of the intersection, a relationship borne out by a drive by this location. Comparing this relationship with the maps indicates the older map in figure 1 misrepresents the intersection showing, as it does, the road intersects Old York Road southwest of the cemetery. All other maps reflect the proper relationship. Conclusion: the 1852 map showed the northward projection of Van Liew’s Road incorrectly. (Interestingly, the southern end of this road shows no such error where it intersects modern-day Wertsville Road).

Secondly, in my effort to establish a proper ownership history for a particular property I encountered an Indenture (Deed) which had no reference for the record of the previous transaction. (If you haven’t undertaken such a study yet, it is a tremendously useful feature of a typical Deed document that the tract description is often followed by a statement such as “… being the same premises conveyed by… to… and recorded in the clerk’s office of Hunterdon County [date] on liber [number] of deeds [page]”). I encountered a Deed dated 1874 for which no previous transaction was cited. Inspecting earlier maps a property owner is identified and, when seeking this name in the Grantee book in the County Hall of Records pushed the ownership history back to a Deed recorded in 1826. The tract was sold to the owner consistent with a Last Will-directed sale that occurred some 48 years earlier!