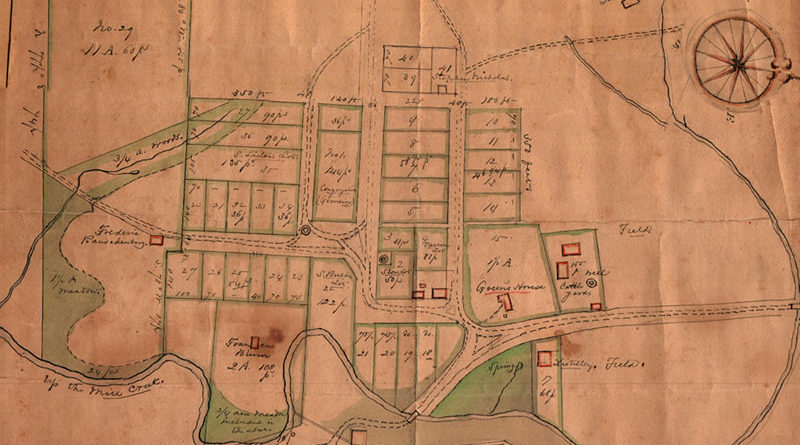 Map 223 (Figure 1, stitched thanks to Bob Leith) is entitled “Draught of the “Gemein Ort”/Moravian Town in Greenland in Jersey Surveyed Nov 26, 1774”. The Society has three copies of this survey map (Maps 222, 223, and 224), two of which are tracings and one of which might be an original, although Lehigh University’s “Hidden Collection” of drawings and prints has what is undoubtedly an original titled in German (“Grund Riss von dem Gemein Ort auf Greenland in der Jersey ausgelegt den 26 November 1774”). The scale is 1” = 10 Ruthen, a pre-metric Prussian measure approximating an English Rod of 16 feet. Our maps are titled in English, with distances and areas measured in feet, acres and perches (“p” on the map).

Not only does the Society own three copies of the map, but in Manuscript Collection26, Box 8, Folder 352 Bob Leith found a letter memorializing the purchase of the tract (Figure 2).

Three early settlers of the land were John Samuel Green, Francis Blum and Frederic Rauschberg, whose buildings are shown in red and labeled on the map (Figure 3), and whose names are included on the Memorandum (Figure 4). For more on Green, CLICK Goodspeed Histories / Samual Green.

My understanding is that a “Gemein Ort” was a settlement meant for believers of the Moravian faith. Greenland, so named after the aforementioned John Samuel Green, was officially accepted by The Moravian Church after it was surveyed, and on February 8, 1775 the name was changed from Greenland to Hope, the new name being derived from the “hope of immortality” of the early Moravian settlers. This name change was done by drawing lots, and is specifically mentioned in the Memorandum (Figure 5).

After almost 40 years of the Moravian “experiment” in Warren County, the community was sold and nearly all Moravians returned to Bethlehem or Nazareth, Pennsylvania. The main reason for closing the community was that it was never self-supporting and had declined from its height of population of 147 to under 100 people by the early 1800’s. The congregation’s last act was the service of worship in the Gemeinhaus on Easter Sunday, April 17, 1808.

Vestiges of the old settlement still remain. The Hope Moravian Cemetery is the modern incarnation of the graveyard on the map. The Facebook page of the Hope Moravian Cemetery states the earliest dated marker is 1768. The mill – dating to 1769 – still stands (now the Inn at Millrace Pond), as does the Moravian Church (now the Bank of Hope). The Hope Historical Society has a museum and offers brochures for a self-guided walking tour of the Village, a State and National Historic Registered district. CLICK here for more information.

The Moravian faith has a rich history in Colonial America, and there were established communities in many of the colonies, as far afield as Salem, NC. There were also Gemein Orts in both Lititz and Emmaus, PA  the latter of which is marked with an historical marker. CLICK to view here.

HCHS  The Sked Distillery May 28, 2020 phyllis hartzell If you drive the length of Rocktown Road, you pass the solitary stone wall shown in the photo. If you conclude it is the remains of the Sked Distillery, you’d probably be right. (WARNING: this is on private property and in no condition to be...
View on Facebook
·Share

OAKLEY, Annie – (1860-1926) was the sharpshooting star of Buffalo Bill's Wild West Show, a Western-themed circus that entertained millions from 1883 to 1915. The Feb. 9, 1899, issue of the Milford Leader reported, “On Thursday and Friday of this week, Messrs. Warford and Apgar, our sporting hote...
View on Facebook
·Share

Remembering on this Memorial Day weekend those who gave the ultimate sacrifice:

Major Lambert Boeman of Flemington raised a volunteer company of infantrymen in 1862 for the 15th NJ regiment then being formed. Boeman became Regimental Major on May 24, 1863 and at the Battle of Cedar Creek, Oct. 19, 1864 was promoted to command the 10th New Jersey Regiment on the death of its colonel and capture of its lieutenant colonel.
On the first day of his new command, Major Boeman was struck by a musket ball in the elbow. He returned to the head of his regiment after having his wound dressed but after an hour or so was killed in action at age 32. He is buried in the Flemington Presbyterian Church yard.

Born in Philadelphia, Dr. George P. Rex studied medicine in the office of Dr. George McClellan, father of George B. McClellan, who commanded the Army of the Potomac twice. Dr. Rex lived in Clover Hill and Reaville before moving in 1856 to Perry Il. When the Civil War broke out he entered the service as a surgeon of the 33rd (Normal) Illinois Infantry, and served until 1865.

Serving with the western army, he witnessed the fall of Vicksburg on July 4, 1863 writing, "We are a jubilant happy set of fellows. . . This morning firing ceased along the lines and I jumped on my mule and rode over to the rifle pits . . .I stood upon the ramparts of our works, within 20 yards of the rebels and their fortifications. While I stood there I had the satisfaction to see the white flags run up along the rebel fortifications, announcing the surrender." Rex was made post-surgeon of the United States army at Selma, Ala., in 1867, and two years later was appointed by President Grant assessor of internal revenue for the Second District of that state. With his health failing, Dr. Rex returned to Reaville and continued to practice medicine. Dr. Rex died in 1889 and is buried in Pleasant Ridge Cemetery in East Amwell.

Final note: Rex's son, Oliver, also served as a surgeon in the 33rd Illinois. (Photo of Dr. Rex from "The History of the Thirty-Third Regiment Illinois Veteran Volunteer Infantry.")

Our latest collection release in the archives is Collection No. 223, the Herman Deinzer Papers (1948-1987).

This collection is comprised of records from the Deinzer family of Clinton, NJ. Most of the collection consists of music composed by Herman Deinzer, and the majority of the sheet music was composed for a mass in honor of Elizabeth Deinzer, Herman Deinzer's wife.

Herman Deinzer was born in Germany in 1905 and moved to New Jersey where he had four children with his wife Elizabeth Deinzer. He was a composer and singer and composed music for the 'original' Hunterdon Symphony. He also sung bass in several choral groups, and wrote music for and performed in several Hunterdon County churches. His musical scores and writing are chiefly remembered for the funeral Mass and memorial service he produced to honor his wife Elizabeth in 1981. Herman Deinzer passed away in 1986 in Clinton, NJ.

Other items included in this collection are some family records, photographs, music programs, school records, letters, and newspaper clippings.

The collection inventory may be found here: hunterdonhistory.org/wp-content/uploads/2020/05/Collection-223-Container-List.pdf

Special Thanks to Archival Volunteer Harlene Rosenberg for processing this collection!