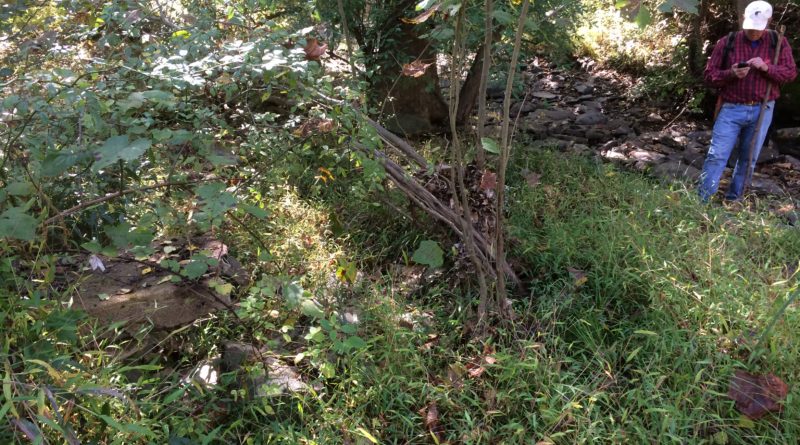 Instead of posting a “new” map, I relate an interesting “assist” involving use of the Society’s maps. Last month I wrote about the benefits of incorporating multiple vintages of historical maps in researching older properties. This month I discuss a serendipitous result facilitated by consulting the maps held in the Historical Society’s Map Collection, and featured in last month’s Gem article.

Last year I heard from a friend (thanks, Toni!) who found what appeared to be an old mill site on the eastern bank of a small stream (Figure 1). The discovery was made during work on a “Green Acres” easement in the extreme southern part of Hunterdon County. We speculated on the identity of the mill site in an e-mail exchange.

But inspecting the area in the 19th Century maps in the Society’s Collection (Collection Gem, January 2017) it became clear that an “A. Snook” lived near the site as early as 1851 (Figure 2). He was the nearest resident to a “G. Mill”, almost certainly a grist mill. By 1860 the same house was inhabited by “A. & F. Snook” (Figure 3).

Another friend clearing the trail discovered a reference to the “Snook grist mill” in an internet search. Consulting the 1850 Federal census I located an Alexander Snook (carpenter) living in the area. The fact that Alexander was listed as a carpenter rather than miller is unsurprising. Milling, relying on water power as a motive force, was a seasonal occupation, suspended when water became frozen and “immobile”. And the wooden elements of a mill were practically fully replaced every six years, so a skilled carpenter would have plenty to do! As for the age of the mill, the maps indicate it was operating as early as 1851, but it is not shown on the 1828 map I share in the March Collection Gem. So the best I can do is to provide an “age bracket” between 1828 and 1851. It’s noteworthy that a Snook family member occupied the property from at least 1851 through 1902, based on the available maps. Another observation…

The 1873 Beers map identifies no residents in the area between the County line and Rocky Brook (figure 4). But the land is clearly settled in 1860 (Figure 3) and 1902 (Figure 5) maps. What does this mean? Was the land was simply over-looked by the surveyor or the draftsman? Or some other reason? Perhaps “Beers” was more than simply the topographer’s name! I suspect the Township portion of the 1870 Federal Census has the householders in the area not mapped by Beers in 1873. But if one was using only the 1873 Beers map to locate an ancestor’s residence, the resulting conclusion might very well be inaccurate. A learning: when using a single vintage map to identify a particular individual, caveat emptor!

Please “come back” next month when I feature map an 1828 State map and request your help in identifying some of the early 19th Century businesses and churches in Hunterdon County.